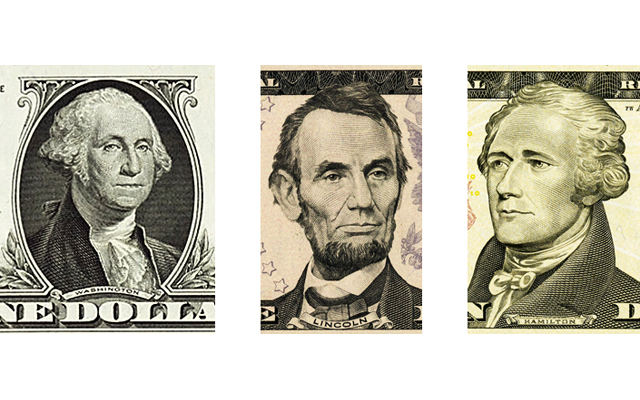 Alexander Hamilton, George Washington and Abraham Lincoln were among male portraits on U.S. paper money ranked by their attractiveness or "hotness" quotient on buzzfeed.com

Social news and media entertainment site BuzzFeed jokingly ranked the male portraits on U.S. paper money according to “hotness” recently, and it should come as no surprise that the country's first Treasury secretary tops the list.

Calling Hamilton “America’s Sweet Prince of the Pocket,” BuzzFeed's post says “it’s only fitting that Alexander Hamilton is on the face of the $10, because he is a 10, through and through. That Grecian nose! Those soulful eyes! The coy smile playing at the corners of that perfectly etched mouth!”

Washington, depicted on the current $1 FRNs, was described as “not the first guy you’d bring to a party — yet, somehow … not the last. With a certain tilt of the head and a heavy squint, he looks just the smallest bit like [actor] Joseph Gordon-Levitt.”

Ranked No. 7 was “Babe-raham” Lincoln.

Lincoln's portrait on the $5 FRNs is noted for “hollow cheeks that models would envy, that stoic look and our collective knowledge of the genius behind those eyes is enough for a slow nod — and a slow clap, too.”