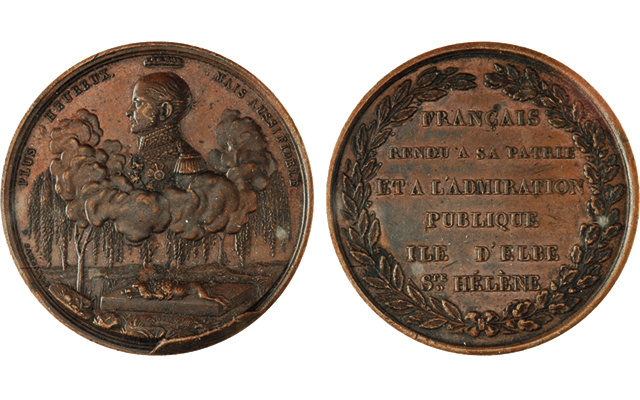 French bronze medal does not specifically identify the name of the general whose visage is depicted on the medal.

Below is a dog stretched out on a grave, symbolizing ultimate fidelity. Inscriptions note the subject’s “Good fortune and fidelity ... turn to his country and to public Admiration from the Island of Saint Helena” in 1840.

This was the year of the Return of the Ashes, Napoleon’s body, from his South Atlantic rock of exile to his grand tomb in the Invalides in Paris.

The name of the Frenchman depicted on the medal appears nowhere on the piece, but he was obviously involved with Napoleon’s entombment in France, gloriously stage-managed by Citizen-King Louis Philippe to exploit the prevailing wave of Napoleonic nostalgia for the king’s July Monarchy. The project began with the voyage of the king’s son the Prince de Joinville in the warship La Belle Poule to Saint Helena.

The emperor’s body was exhumed, its coffins opened. The well-preserved remains were identified, placed aboard ship and brought across the Atlantic to the port of Cherbourg, then transported by water up the Seine, thence in a sumptuous funeral procession to the Invalides, where it was presented to the king.

Who, then is the well-deserving general on the medal? Two generals accompanied Napoleon in 1815: Charles Tristan Marquis de Montholon and Henri-Gratien Comte de Bertrand (1773 to 1844). Both inscribed the emperor’s reminiscences and wrote of his life in exile, returning to Europe only after Napoleon’s death in 1821.

Montholon was not in high repute in France because of old legal problems involving corruption and claims of military honors he never received. Bertrand was esteemed, having been sentenced to death in 1817 but pardoned by Louis-Philippe and sent with the Joinville expedition.

Both men figure in a conspiracy theory alleging that Napoleon died of arsenic poisoning contrived by the British government or by French opponents. However, modern forensic analysis of four locks of Napoleon’s hair taken at different times in his life and locks from his second wife and son show essentially identical amounts of arsenic.

It is probable that arsenic vapor was produced by tropical molds in the arsenic-based Scheele’s Green wallpaper in Napoleon’s residence Longwood, sickening his entire staff. The emperor actually died of stomach cancer, as did his father, Carlo, and other family members.

As to identity, comparison of the features on our mystery medal with the portrait on a 25.2-millimeter brass medalet commemorating Bertrand’s death on Jan. 31, 1844, proves that it is Bertrand, not Montholon, who is honored on this somewhat perplexing piece.