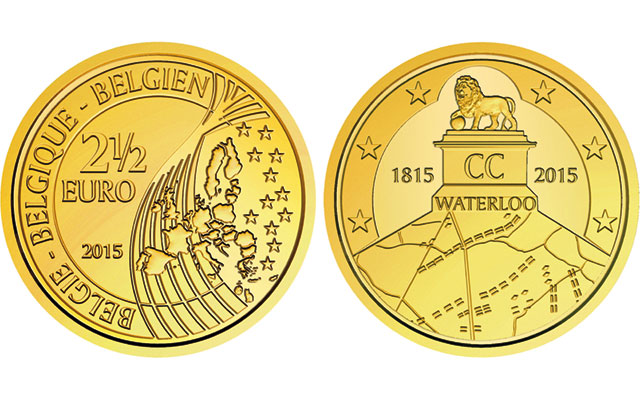 France objected to Belgium’s plans to commemorate Napoleon Bonaparte’s defeat at Waterloo with a circulating €2 coin, so Belgium instead issued a noncirculating €2.5 coin.

Instead, Belgium will use the same design on a noncirculating legal tender €2.5 coin.

Same theme, same general design, same hurt feelings — the coin just won’t be eligible to circulate across the eurozone (including in France).

The Battle of Waterloo was fought on June 18, 1815, near Waterloo in present-day Belgium, then part of the United Kingdom of the Netherlands.

According to Wellington, the battle was a close contest, “the nearest-run thing you ever saw in your life.”

The defeat at Waterloo ended Napoleon’s rule as Emperor of the French, and marked the end of his Hundred Days return from exile.

The reverse of the collector coin features the Lion’s Mound, a large conical hill built at the battlefield. The monument was raised to commemorate the location where William II of the Netherlands (the Prince of Orange) was knocked from his horse by a musket ball to the shoulder during the battle. Its construction was ordered in 1820 by his father, King William I of the Netherlands, and completed in 1826.

Below the monument on the coin is a map of the battlefield.

The obverse of the coin carries the name of the issuing nation (in Dutch, French and German, the official languages of Belgium), with the denomination, and a map of Europe.

Distributor Coin & Currency Institute will offer the coin to collectors in North America for $12.50.

Want to know more about Waterloo coins? Coin World has you covered!