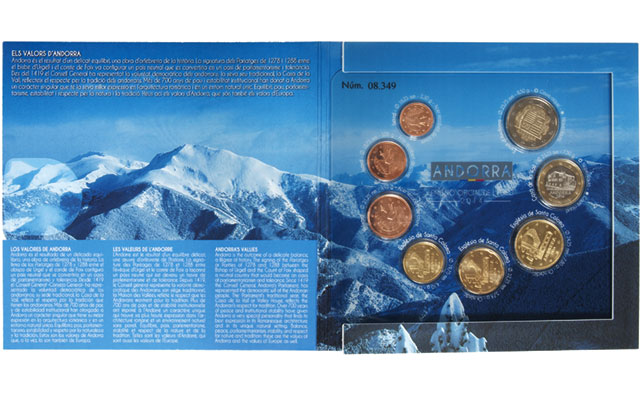 The special set with a limited mintage of 70,000 sets opens up to reveal a narrative in three languages and a slot to place the card with the coins. 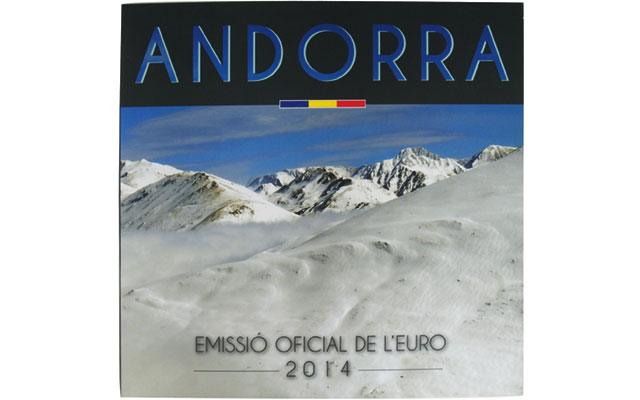 The cover of Andorra's first euro coin set, dated 2014, recalls the mountainous region where the nation is located. 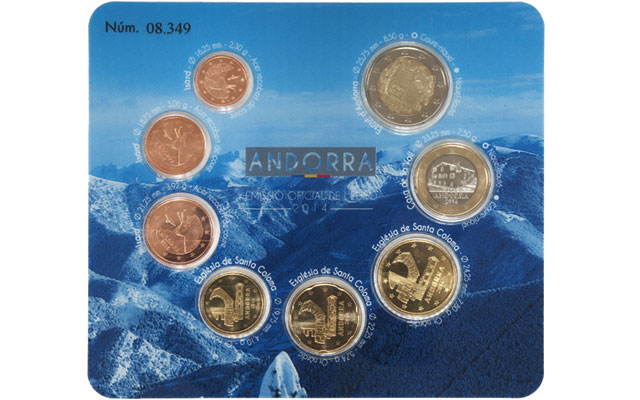 A thick card allows both sides of the coins to be seen; the national or obverse sides are visible here.

Though Lithuania received much attention at the beginning of 2015 for making the switch to the euro, another European nation also issued its first euro coins in January.

The tiny enclave of Andorra, an independent principality on the French-Spanish border with no former official currency, finally issued euro coins, nearly three years after receiving approval from the European Commission and some 18 months after Andorran officials originally planned to issue the coins.

Andorra had been using the euro as a de facto currency for several years, meaning that the euro had no legal status in Andorra but was commonly circulated. The euro had de facto replaced the Spanish peseta and the French franc, which had previously been in circulation.

The reverse sides of Andorra's euro coins depict the map images common to the coins of all eurozone nations. The euro obverses, however, are distinctive for each nation issuing the coinage.

Three of the four designs for the national (obverse) side of Andorra’s coins were selected in a design contest that began March 20, 2013.

The obverse designs were to follow the theme of landscape, nature, flora and fauna of Andorra for the 1-, 2- and 5-cent coins; Romanesque art for the 10-, 20- and 50-cent coins; and the Casa de la Vall (historic Parliament building) for the €1 coin.

The government chose the coat of arms of the Principality of Andorra for the €2 coin.

At least 80 percent of Andorra’s euro coins intended for circulation are to be sold at face value, so the government began selling sets to residents on Jan. 15 for their face value of €3.88. Those sets are offered on a colorful card allowing both sides of the coins to be seen.

In addition, on Jan. 15 the government began selling limited edition versions of the sets to collectors for €24 each. These sets are housed in more elaborate packaging than the sets sold at face value and are limited to a mintage of 70,000 sets. All of the sets made available in Andorra that first day of sale, some 600 sets according to a local media report, were sold out.

Coin World spoke with dealers in Berlin who reported that people lined up to buy the new euro coins in Andorra, and that noncollectors were enticed by dealers who visited folks in cafes and shops, offering to reward them for buying a set. In turn, the sets were being sold on the secondary market in Berlin for €120 (about $136 U.S.) during the World Money Fair.

According to government announcements, Proof versions are expected to be released some time in March.

In addition, a circulating commemorative €2 coin, marking the 20th anniversary of the admission of Andorra to the Council of Europe, is expected later this year.