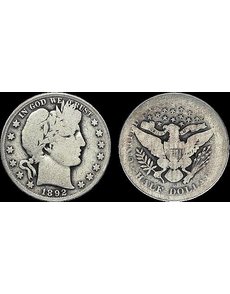 The 1892-O Barber, Micro O half dollar is a classic rarity in the series. This About Good 3 example with a Certified Acceptance Corp. green sticker brought $3,055 at Heritage’s Sept. 25 Long Beach auction.

In a market that goes crazy for rare coins in high grades, auctions provide many reminders that the price on low-grade rarities keeps rising as well.

At Heritage’s Sept. 26 Long Beach auction, a 1794 Flowing Hair cent of the legendary “Starred Reverse” variety graded Very Good Details, Corroded, Net About Good 3 by ANACS brought $16,450. The cataloger suggested a sharpness grade of Fine 12 with an Early American Coppers grade of AG-3. Five years ago, low-grade examples could be found below the $10,000 level.

But in 2012, a Professional Coin Grading Service Fine 12 example of the rare variety — distinguished by the presence of 94 tiny stars between, and sometimes under, the dentils — brought $74,750 at a Heritage auction. Later that year another example graded Fine Details, Environmental Damage, by Numismatic Guaranty Corp. sold for $28,200.

Popular consensus is that a New Orleans Mint mark punch for a quarter dollar was used instead of the half dollar punch. The result is an unusually small O. A piece that was an exact comparable to the coin just sold brought for $2,530 at a 2012 Heritage sale and that same example from 2012 was resold for $3,055 earlier this year.

A low mintage of 54,617 makes the 1870-CC Seated Liberty half dollar a key in the series and Heritage’s Long Beach sale featured one graded PCGS AG-3 that brought $998.75. It may take some time for another one priced below $1,000 to come to market.

Holed coins are always sold at heavy discounts, but when holed coins are repaired with some skill, the visual impact of the hole can be somewhat diminished.

Such was the case with a 1796 Draped Bust quarter dollar graded PCGS Genuine, AG Details, Plugged. It was not an unpleasant piece, and while it was repaired in multiple places, it featured a bold date, strongly outlined devices on the obverse and a reverse that, while showing extreme wear consistent with the grade, showcased solid definition on the eagle.

It sold for $3,055 at Heritage’s Sept. 27 Long Beach auction and it may be a while before another similarly affordable example of this coveted one-year type crosses the block. ¦