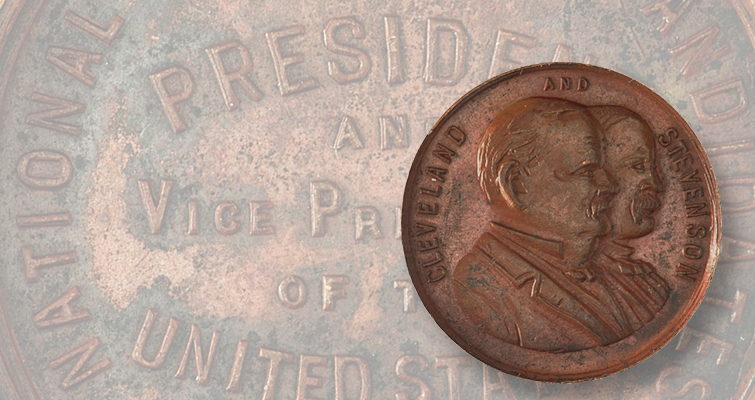 Medallic evidence offers a glimpse at the "first" Adlai Stevenson to make his name well-known in the political arena. 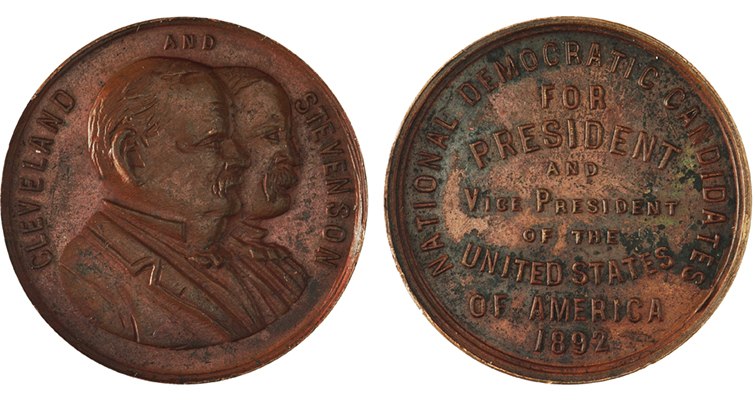 Struck by Seward and Smith of New York, this presidential campaign medal from 1892 depicts Grover Cleveland and his running mate, the “first” Adlai Stevenson.

The Research Desk column from the May 9, 2016, Weekly issue of Coin World:

Some of our readers will recall the spirited presidential campaign of 1952, which saw Republicans Dwight D. Eisenhower and Richard M. Nixon triumph over Democrats Adlai E. Stevenson of Illinois and John Sparkman of Alabama.

Few if any remember an earlier Adlai Stevenson, leading Illinois Democrat who served as vice president during the second term of President Grover Cleveland in 1893 to 1897. Born in 1835, this earlier Stevenson, grandfather of the second Adlai, died in 1914 after a busy political career that included running again for vice president on William Jennings Bryan’s 1900 ticket.

Born in Kentucky to a Scottish family that had settled in Pennsylvania in the 1730s, the earlier Stevenson began his public life in Illinois. He was able to avoid the extremes of purely personal animosity that often accompanied partisan debate and struggle.

While Cleveland intoned “public office is a public trust” and sought civil service reform, he appointed Stevenson postmaster general only to watch him dismiss hundreds of Republicans from postal jobs and replace them with Democrats.

Cleveland and Stevenson received the Democratic nomination on the first ballot at the 1892 Chicago convention.

Among campaign medals distributed was DeWitt GC 1892-12, a 31-millimeter piece rarely encountered in silver, more collectible in 3.7-millimeter thick copper and aluminum, then a “new metal” and significant novelty.

Struck by Seward and Smith of New York, the medals present imposing mustachioed jugate busts of the two candidates facing right. The reverse hails them as NATIONAL DEMOCRATIC CANDIDATES FOR PRESIDENT AND VICE PRESIDENT OF THE UNITED STATES OF AMERICA 1892.

“National” was still a key word after the party’s disastrous north-south split in 1860.

Securely in office, the new vice president quietly abandoned his overt support of Free Silver to back Cleveland’s position advocating the gold standard. He presided with dignity and skill over the U.S. Senate and remained active in his party after Cleveland left office, even after the flamboyant William Jennings Bryan became the standard-bearer in the following years. The Stevenson family remains active in Illinois politics to the present day. 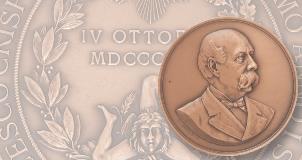 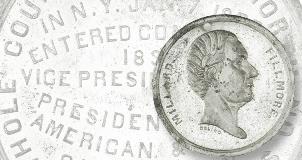