Additional gold bars to go on display at Denver Mint May 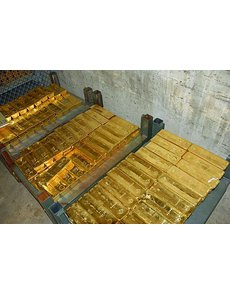 Three gold bars, similar to these shown from the 2006 working stock for the inauguration of the American Buffalo gold $50 bullion coins at the West Point Mint, will be put on indefinite display at the Denver Mint for a Gold Bar Exhibit on the Denver Mint’s public tour.

Three .9999 fine gold bars with a combined value of more than $2 million will go on indefinite display on the public tour at the Denver Mint.

The bars are from working stock at the West Point Mint.

U.S. Treasurer Rosa “Rosie” Gumataotao Rios was scheduled to unveil the Gold Bar Exhibit to the media the afternoon of May 10, on the first day of the American Numismatic Association’s National Money Show in Denver.

Gold bars, according to Tom Jurkowsky, director of the U.S. Mint’s Office of Public Affairs, can be characterized as “deep storage” or “working stock”:

? Deep Storage is defined as that portion of the Treasury-owned gold bullion reserve that the Mint secures in sealed vaults. Deep storage gold comprises the vast majority of the bullion reserve and consists primarily of gold bars.

? Working Stock is defined as that portion of the Treasury-owned gold bullion reserve that the Mint can use as the raw material for minting coins. Working stock gold comprises only about 1 percent of the gold bullion reserve and consists of bars, blanks, unsold coins and condemned coins, according to the Mint. With working stock, gold bars are purchased by the Mint and then sold to a fabricator who makes blanks and then the fabricator sends the blanks back to the Mint where they are made into gold products, according to the Mint.

The Treasury Department’s Financial Management Service indicates that as of April 30, 2012, Mint-held Treasury gold at all locations, comprising coins, blanks, bars and any other form, totaled 2,783,218.656 fine troy ounces.

The totals do not include Treasury-owned gold held in Federal Reserve Bank vaults or on display. The book value of all Treasury-owned gold is based on the statutory value of $42.2222 per troy ounce and not the prevailing spot price. The value of the three gold bars placed on exhibit May 10 at the Denver Mint is calculated on the current spot price of gold.

The Gold Bar Exhibit is an extension of the Denver Mint’s history, which dates back to 1858 when gold was discovered in Colorado.

For its first 46 years, the United States Mint at Denver was only an Assay Office in the Clark, Gruber and Company Bank Building. Miners brought in gold dust and nuggets to be melted, assayed and cast into bars stamped with their weight and quality.

By 1895, the Assay Office was booming, bringing in more than $5.6 million in gold and silver deposits annually. In 1904, the government converted the Assay Office into a working Mint, and built a much grander facility, an Italian Renaissance style building modeled after a Florentine palace.

Today, the Denver Mint manufactures all denominations of circulating coins, coin dies, the Denver Mint portion of the annual Uncirculated coin sets and commemorative coins authorized by Congress. The Denver Mint is also a repository, storing gold and silver bullion. ¦