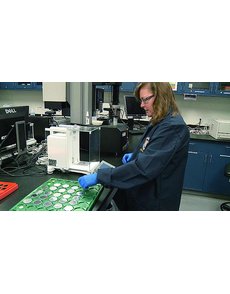 The chief assayer at the West Point Mint, Jeanette Grogan, begins logging in a selected lot of raw blanks submitted by an outside vendor to be struck into silver American Eagles. 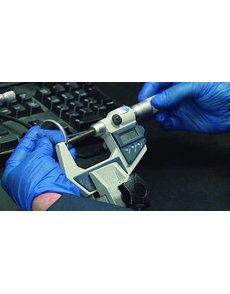 Each blank that undergoes testing is subjected to a number of measurements across the surface from the rim to the center to make sure the basin, or contour, meets specified guidelines. 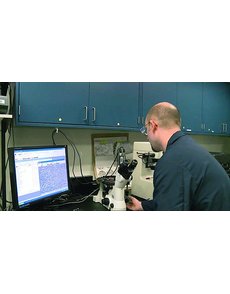 Metallurgist Christopher Cowen uses a microscope and computer to view a magnified cross-section of a silver American Eagle blank so he can examine the microstructure of the composition. 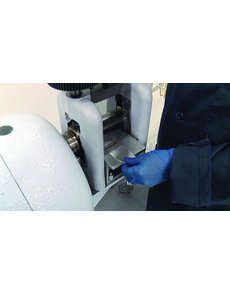 A cut sample from a silver blank is rolled flat before undergoing testing to confirm the required .999 fineness. 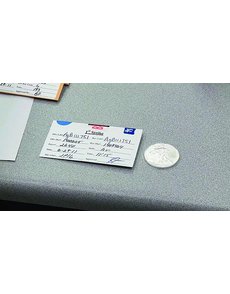 Quality inspectors save the first strike from a new pair of dies as well as the last before the dies are retired. This “first strike” American Eagle silver bullion coin was struck the morning of June 28, 2011.

The United States Mint is committed to guaranteeing that each precious metal coin the West Point Mint produces meets the legislated standard for each issue.

Achieving that goal is the job of the U.S. Mint’s chief assayer at West Point, Jeanette Grogan, and her team of chemists, metallurgists, quality inspectors and engineers.

Grogan and her colleagues conduct the testing of every shipment of gold, silver and platinum blanks delivered by outside vendors to the West Point facility, located adjacent to the United States Military Academy in New York.

Grogan and three other chemists are responsible for testing samples from each shipment of blanks to guarantee they meet the legislated standards for fineness, and the stated weight of each metal as designated in the inscriptions on each coin.

“We’re actually certifying to the American public that the coins they buy from the government are the purity that we say they are,” Grogan said in a recent interview. “And we do guarantee the weight of the metal in troy ounces and the alloy composition.”

A statistical sampling is conducted of each delivery of blanks, according to standards established by the American National Standards Institute, or ANSI, Grogan said.

Grogan says she and the other chemists inspect the raw blanks as they are delivered several times a week. The universal blanks, with the proto-rims already upset, are the same whether they will be used for Proof, Uncirculated or bullion versions. (The planchets and dies used for the Proof and Uncirculated versions may receive further, special treatment to produce during striking the finish specific to each version.)

The blanks are sampled for physical dimensions, weight, diameter, surface roughness and hardness. Measurements are also taken of the thickness of the blanks, at the center and out to the edge to make sure the basin, or contour, will contribute to proper metal flow and fill of the coinage designs.

The sampled blanks are then cross-sectioned by a metallurgist to examine the grain or microstructure, Grogan said. The cross-section will then be rolled flat and sampled for alloy composition, she said.

Failure to meet established standards could result in an entire selected lot of blanks from a shipment to be rejected first, and possibly an entire shipment, Grogan said.

Shipments of blanks that do meet the mandated standards are released to the production floor, Grogan said.

Grogan also oversees a team of three quality inspectors — one per shift — that examine each first strike from each pair of dies and each last coin struck from a pair of dies and perform roving inspections in between.

Each of the examined strikes is photographed, and data are archived in a permanent database, Grogan said. The documented coins are then stored in a vault at the West Point Mint.

Two engineers are part of her staff to assist with quality control and dealing with blank suppliers, she said.

A short YouTube video produced by the U.S. Mint shows Grogan and her inspection team conducting various tests. The video can be found online at http://www.youtube.com/watch?v=Hxjlj1qgQ9Y. ¦