A numismatic trip to the museum 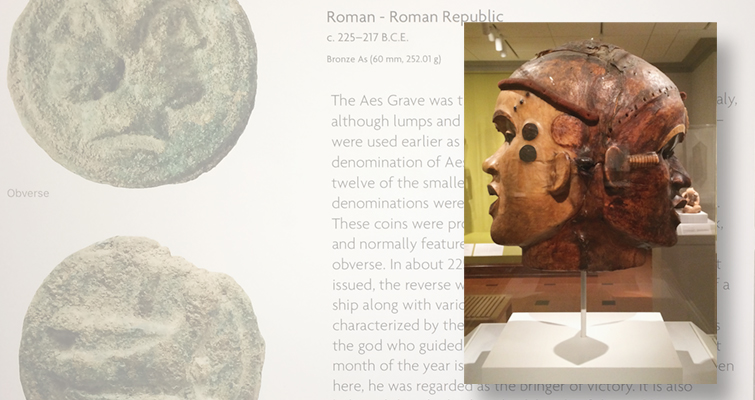 The dual-facing head — the janiform — is familiar to those fond of ancient coins, but seeing it appropriated by an African artist whose work was also on exhibit in the David Owsley Museum of Art helps us understand the universality of the theme. The two-headed mask, made of animal skin stretched over wood, dates from around 1900. 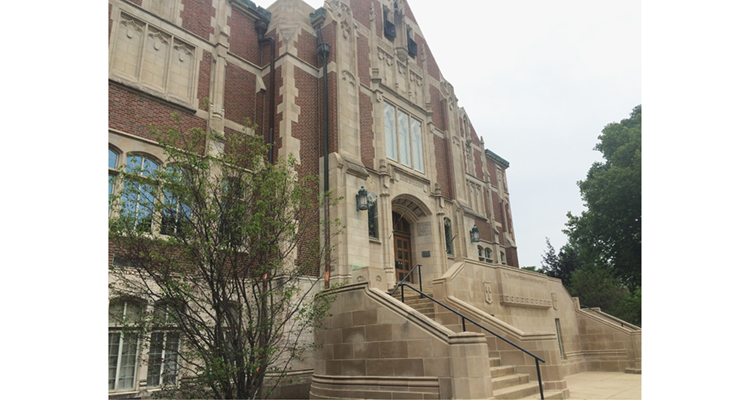 Many numismatic connections can be made in the exhibits at the David Owsley Museum of Art on the campus of Ball State University in Muncie, Ind. 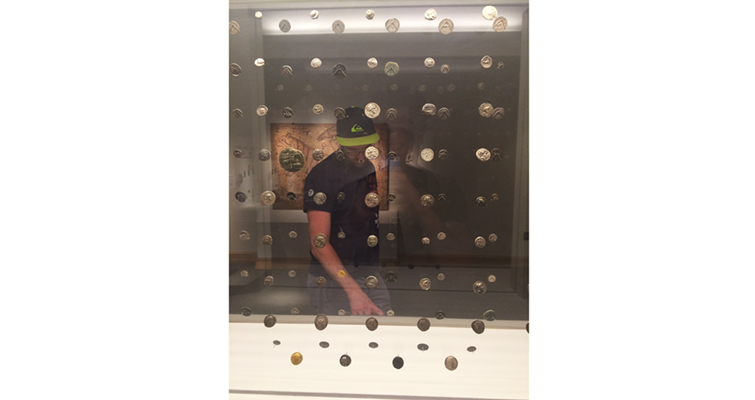 Ancient coins are displayed with a clear panel that allows the viewer to see obverse and reverse designs. 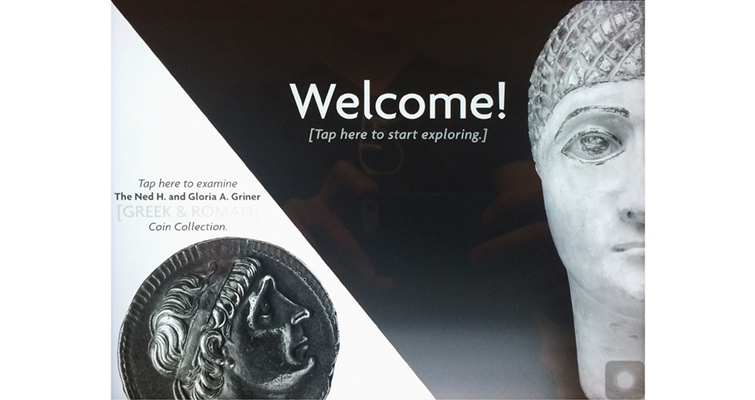 An iPad with a special app allows the viewer to learn more about the exhibits. 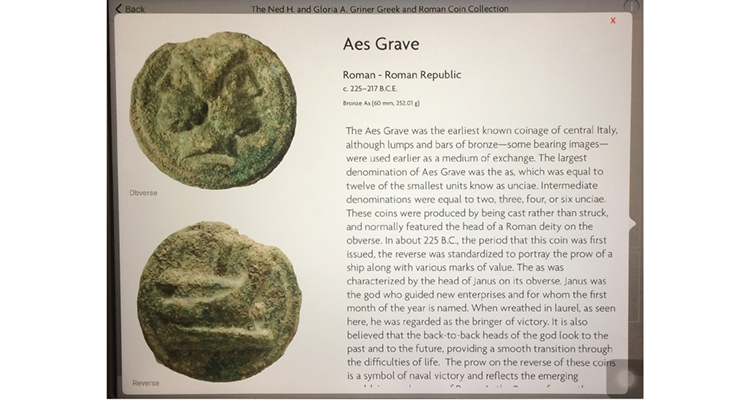 Each coin in the display has its own descriptive text, including this ancient Roman aes grave coin with the head of Janus on the obverse. 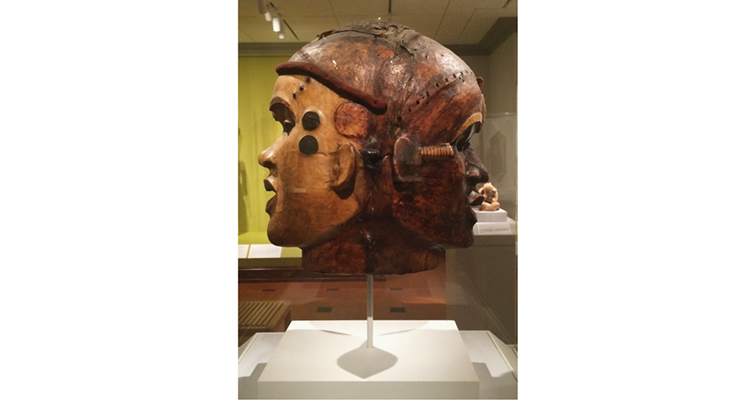 The side view of an African Janus mask at the David Owsley Museum of Art in Muncie, Ind., reminds one of the similar device used on ancient coins displayed elsewhere in the museum. 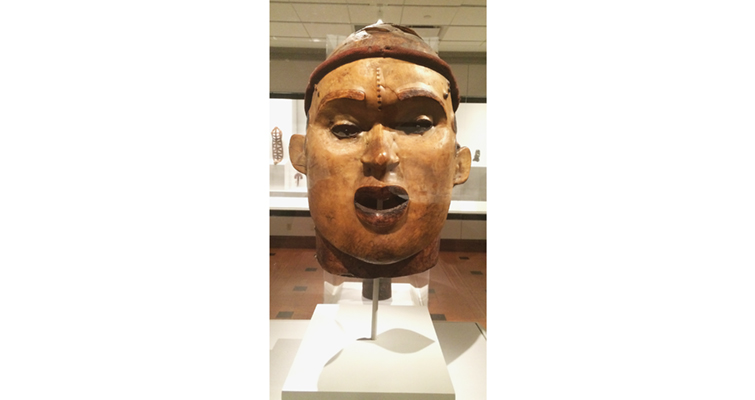 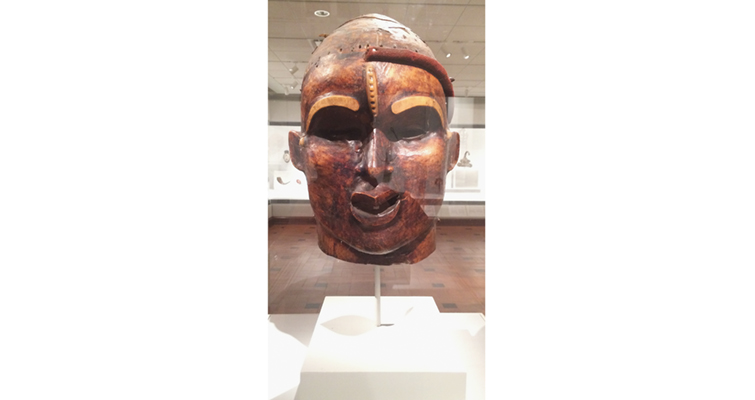 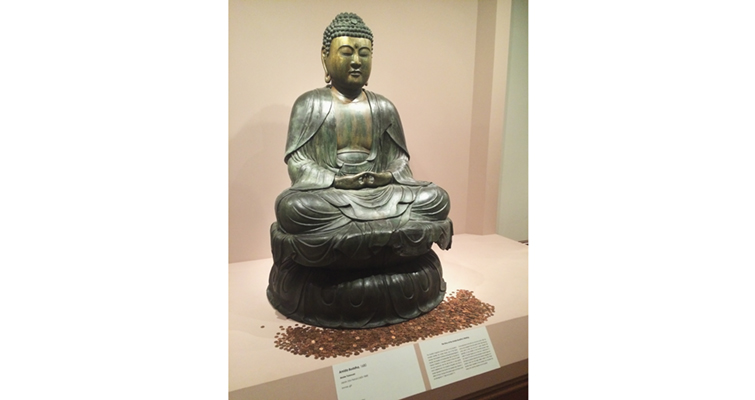 Lincoln cents placed before a bronze Japanese Buddha dating from 1680 provide the viewer with a sense of how temple offerings might be presented before a statue in a temple. 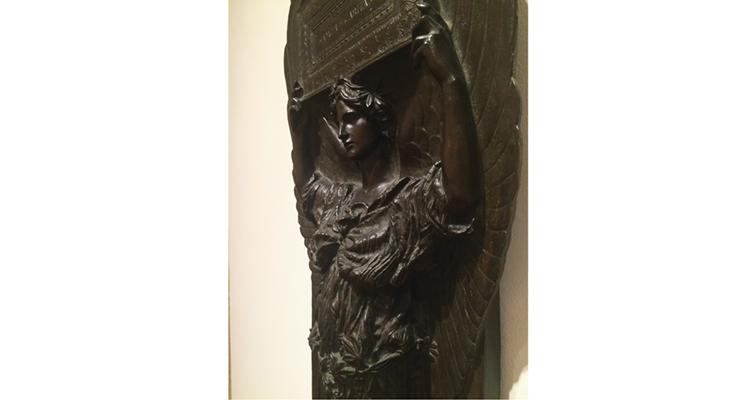 Augustus Saint-Gaudens’ Amor Caritas is among his most popular bas reliefs and is shown here in profile. The profile is similar to the artist’s unadopted design for the U.S. cent. 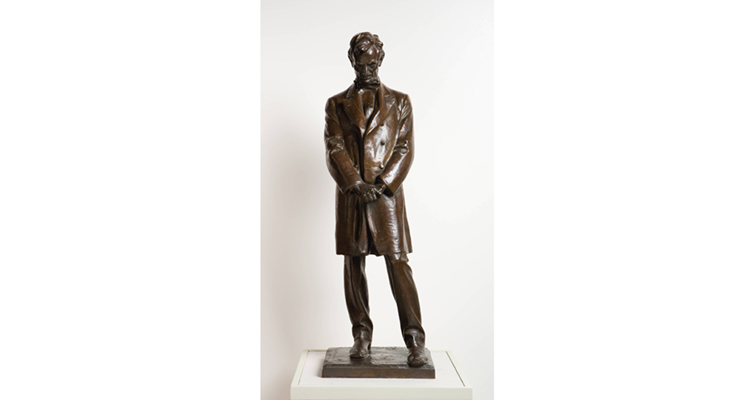 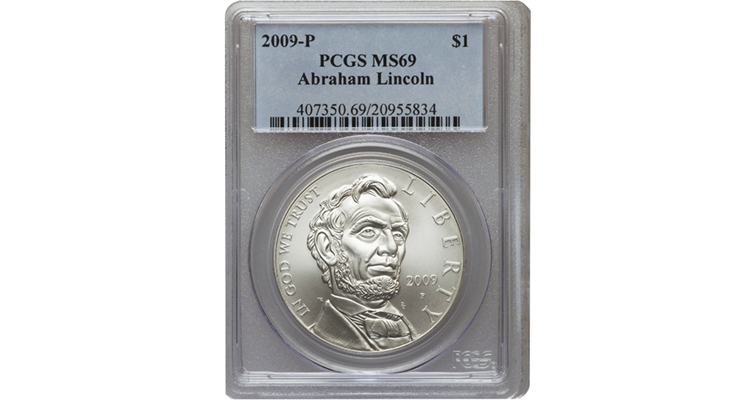 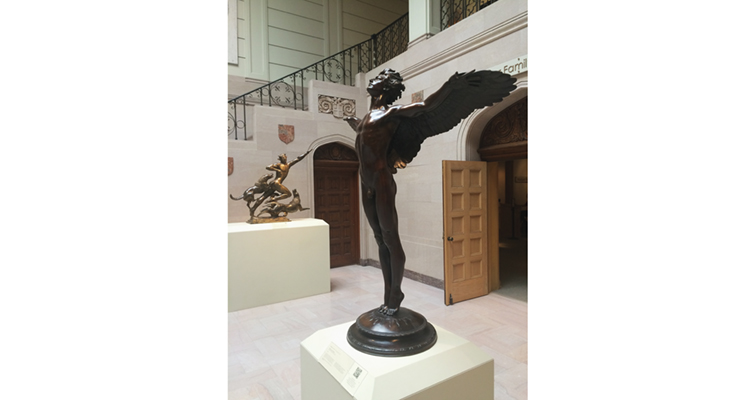 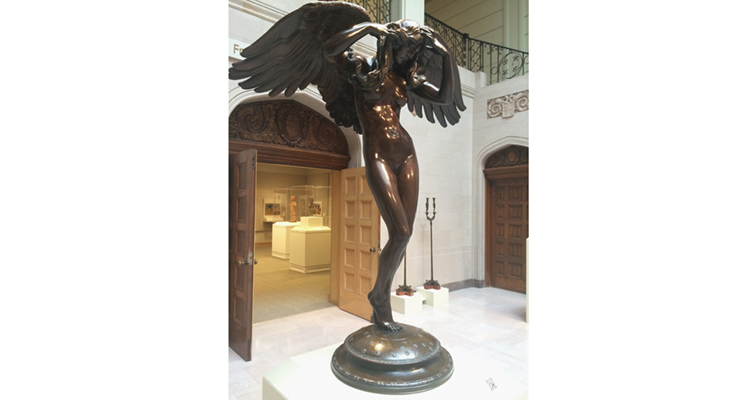 For me, summertime means road trips, and a recent journey took me to the David Owsley Museum of Art on the campus of Ball State University in Muncie, Ind. The museum is not large in size but is nearly encyclopedic in scope, with a 2013 edition expanding galleries for non-Western art by nearly 50 percent.

Its collection areas include ancient, medieval, Renaissance, 17th century, 18th century, 19th century and modern art, and arts of Africa, Asia, Oceania, and the Americas. The museum also houses European and American decorative arts and furniture as well as works on paper, including drawings, prints, and photographs.

Within these galleries are dozens of ties to numismatics. Some are obvious, while others require a bit of effort. Going to a museum with the intention of finding numismatic links can be a great way of changing up the way you interact with your hobby. What follows are a few of the connections I made during my recent visit.

Ancient coins can be proble­matic for museums in that their small size makes them challenging to display (and susceptible to theft when left in storage).

A solution that I’ve seen at several museums is to display ancient coins in large groups with an interactive panel for viewers to receive more information on the individual pieces displayed.

At this museum the coins are generally arranged chronologically and are presented against a clear panel so the viewer can see the reverse of the coins.

The Ned H. and Gloria A. Griner Collection of Greek and Roman Coins has substantial text accompanying each coin, providing context for the coins. The text for the Roman Republic aes grave — a large 60-millimeter coin — includes images of the obverse and the reverse and explains the coin to a noncollector while providing information of interest to numismatists.

This particular label states, “The Aes Grave was the earliest known coinage of central Italy, although lumps and bars of bronze — some bearing images — were used earlier as a medium of exchange.”

The coin depicts Janus, the Roman god of beginnings, transitions and endings. Generally depicted with two faces, one looking to the future and the other to the past, he carried broad meanings in ancient Rome. The prow on the reverse of the coin represents naval victory.

Coins with these designs are usually dated to around 225 B.C.

The dual-facing head — the janiform — is familiar to those fond of ancient coins. Viewers typically think of it used in ancient Roman art, but seeing it appropriated by an African artist whose work was also on exhibit in the museum helps us understand the universality of the theme. The West African artist’s work, a two-headed mask dating from around 1900, is made of animal skin stretched over wood.

The mask has two faces: a male and a female with the male face being darker, with open eyes and mouth and vertical scarification on the forehead. The lighter skinned female face is blind, with two large discs at the temples and three small projections above the eyebrows.

The experience of viewing a three-dimensional Janus head differs from seeing it on a coin. Where a coin can only use the side view to present both, in sculptural form both heads exhibit different personalities and the side view changes. It makes me wonder whether any coins exist on which the artist took an approach similar to that taken by the artist of the mask, incorporating both facing portraits and a traditional Janus-style portrait.

Interacting with the art

Coins play a more direct role in people’s interaction with a large bronze Japanese Buddha sculpture by Master Tokewaki dating from 1680 during Japan’s Edo Period (1603 to 1868).

Lincoln cents have been placed before the Buddha, similar to the offerings that would be placed in the Buddha’s original setting in a temple.

The label shares, “The peace and prosperity of the Edo period following many years of strife and civil war in Japan allowed the restoration of and creation of new Buddhist temples. These called for Buddha figures such as this one, a descendent of the colossal 13th century Kamakura Buddha whose image was dictated by scripture rather than the creative imagination of a sculptor.”

Similar to the way that people put coins in a fountain while making a wish, people would make offerings before the statue in its original context. In Indiana, the offerings help viewers understand the role of the statue and the original role it played.

The collection is strong in the works of sculptors who also designed coins. Augustus Saint-Gaudens is represented with his large bronze sculptural relief Amor Caritas, which was conceived in 1898 and cast sometime before Saint-Gaudens’ death in 1907.

The life-sized version of the bronze won the grand prize at the 1900 Exposition Universelle in Paris and the label notes, “The winged woman is probably Davida Clark, the sculptor’s model and mistress representing an allegory of sacred and profane love.”

This smaller version of the life-sized sculpture, called a reduction, was once set in the wall of the dining room at a Muncie residence. The sculpture embodies the artist’s “adherence to the artistic ideals of the American Renaissance, an art movement that at the turn of the century harkened back to classical subjects, forms and media,” the museum explains.

Saint-Gaudens would, of course, design the famed double eagle that carries his name, along with the Indian Head gold $10 eagle. The profile used on the sculpture is similar to that used on his pattern for the cent and seen on his famed Victory used in the Sherman Monument.

Another coin designer represented in the collection is Daniel Chester French, and his bronze statue of Abraham Lincoln (1912) is one of 12 reduced casts of the original that French made in 1909 for the Abraham Lincoln Centennial Celebration Memorial Association in Lincoln, Nebraska. French’s image of Lincoln — a version of which sits inside the Lincoln Memorial in Washington, D.C.  —  would serve as the model for the 2009 Abraham Lincoln commemorative silver dollar.

French’s statue of a Minuteman is seen on the 1925 Lexington-Concord Sesquicentennial commemorative half dollar.

Perhaps most impressive are Adolph Alexander Weinman’s two bronze sculptures Rising Day and Descending Night. The two personifications, of morning and night, were displayed at the 1915 Panama-Pacific International Exposition in San Francisco. The originals were placed on glass pillars facing one another on the Court of the Universe grounds, which was the symbolic meeting place of the Eastern and Western hemispheres.

The Panama-Pacific International Exposition is well-known to collectors as it was honored with round and octagonal $50 gold commemoratives, along with $2.50 quarter eagles, gold dollars and silver half dollars.

Soon after the sculptural success Weinman saw at the Panama-Pacific Expo, his Walking Liberty half dollar and Winged Liberty Head dime would begin production in 1916. These designs are being revisited in 2016 with gold versions.

While the Owsley Museum of Art admittedly provided a rich pool of objects from which one could make numismatic connections, this exercise is not limited to art museums. In an upcoming issue I’ll explore a historical museum and the ways that coins, paper money and medals enhance the viewer’s educational experience. 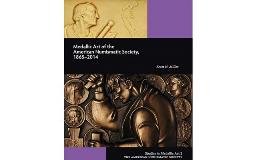 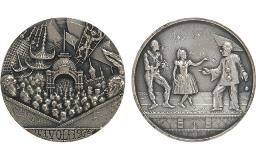 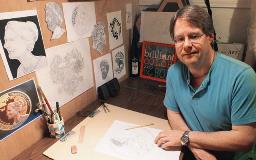