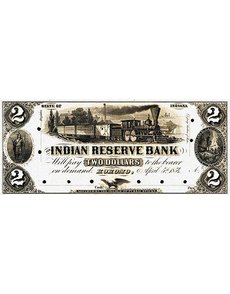 The Indian Reserve Bank of Kokomo, Ind., was founded by three prominent citizens in 1854, a year that was not a good one for banks, as many failed that year.

Most bank names selected in antebellum America were intended to convey a message to people who came into contact with the bank’s notes in circulation.

Names like “The Merchants Bank” or “The Farmers and Mechanics Bank” clearly spelled out the bank’s area of focus and customer base. For others, geography played a role in the name.

Thus a name like the “Delaware County Bank” made it fairly obvious where the bank’s primary place of business was located.

What’s in a name

The Indian Reserve Bank of Kokomo, Ind., had a name firmly rooted in the area’s history.

Like Ohio, Indiana was generally settled from the Ohio River northward.

Native Americans still inhabited much of north central and northern Indiana well into the 19th century, and the city of Kokomo sat right in the middle of the Big Miami Reserve that had been created by the Treaty of St. Mary’s with the Miami Indians in 1819. The reserve was the largest such Indian reservation in the state, comprising more than 760,000 acres.

It stretched from near present-day Logansport on the north to present-day Tipton on the south and encompassed all of present-day Howard County and parts of seven adjoining counties. The pressure for more land for settlement predictably led to further agreements that led to the sale of most of the reserve by 1846, although many Miami tribe members remained on the land as private landholders. Thus, the ink on the final land sales document was barely dry when the Indian Reserve Bank was formed as a Free Bank in 1854 by three prominent local citizens, including David Foster who had founded Kokomo in 1844 when he donated 40 acres of land to be used to create the county seat for Howard County.

1854 was not good to Indiana’s free banks, with a large number failing by the end of the year due to troubled financial markets.

According to contemporary documents, the Indian Reserve Bank had suspended issuing additional circulation by early 1857, with the notation in the December 1859 issue of Bankers Magazine that the bank’s circulation was being redeemed at par at the office of one of the bank’s founders, John Bohan. The crowning blow that ultimately led to the bank’s complete closure occurred on April 30, 1860, when the bank suffered a multi-thousand-dollar robbery of county tax collections that had just been deposited.

David Foster sold enough land to make the losses good, averting a financial disaster for all but himself.