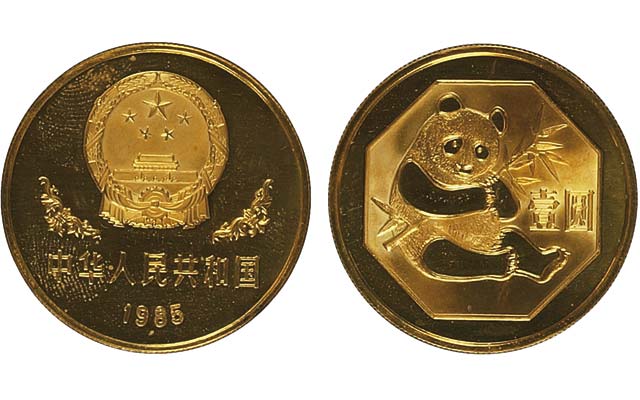 A Proof 1985 brass Panda 1-yuan coin from China should not exist. However, a small number were made for dignitaries, and one is now offered in a March 29 auction.

What explanation is there when a coin exists but shouldn’t?

By most records, the Proof 1985 Chinese Panda brass 1-yuan coin was not going to be made, because of lackluster sales of brass Panda coins in 1983 and 1984.

However, an estimated 50 to 100 examples were made, and one of these highlights Champion Hong Kong Auctions' March 29 sale in Macau.

A small number of these were made for presentation to dignitaries. These were sealed in a green cardboard package, which has led many of them to become oxidized and “grow” black spots. Consequently, few are in the condition of the example offered in the March 29 auction.

The “coin offered here is in better preservation than” an example sold in a 2012 China Spring auction for $46,000 U.S., according to Champion.

There are 796 lots in the auction on March 29. To learn more about the sale, visit the firm’s website.