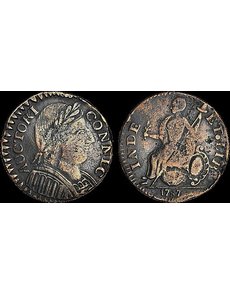 January has been a bellwether month for the Colonial Americana market, with two major auction houses offering collections that have long been regarded by specialists as among the best of their kind. At the Florida United Numismatists convention, Heritage Auctions offered the French and Indian War medal collection of John W. Adams, formed over a four-decade period during which Adams was one of the best known scholars in the field.

The Adams offering was a relatively small one, composed of just over 50 medals, all of which revolved around the French and Indian War of 1754 to 1763. The highlights were four rare medals struck in gold, struck to commemorate British victories of the war and a treaty of peace signed in Germany after the war. The highest individual realization was the 1758 Louisbourg Taken medal, one of perhaps a half dozen known in gold, which sold for $92,000. In an interesting happenstance, every one of the Adams medals was purchased by one collector, bidding via the Internet.

The prices were generally as high or higher than other recent offerings, with significant bidding on both the floor and via absentee options.

The Americana sale was a bittersweet occasion, with many of Tanenbaum’s friends and colleagues competing for coins the late dealer/collector cherished.

The Connecticut coppers were the focus, with nearly 300 varieties up for grabs, most showing nice surfaces or good pedigrees. Steve was a careful buyer of the series, snapping up rarities at auctions of famous collections and seeking out many others through private transactions.

The individual highlight, sold after a lengthy floor battle, was the extremely rare variety of 1787 “Muttonhead” Connecticut copper, Miller 1.2-mm (State Coinage of Connecticut by Henry Miller), which brought $109,250.

The top-selling New Jersey copper was a 1786 Maris 9-G, a rare No Coulter variety. It brought $48,875. Aside from the ex-Tanenbaum lots (billed as Collection SLT in the catalog), the top early American seller was a Colombian 1-escudo cob regulated by famed Philadelphia silversmith Philip Syng, best known for making the silver inkwell used by the signers of the Declaration of Independence. The newly discovered gold piece sold for $87,400, a record sum for a Syng-regulated piece.