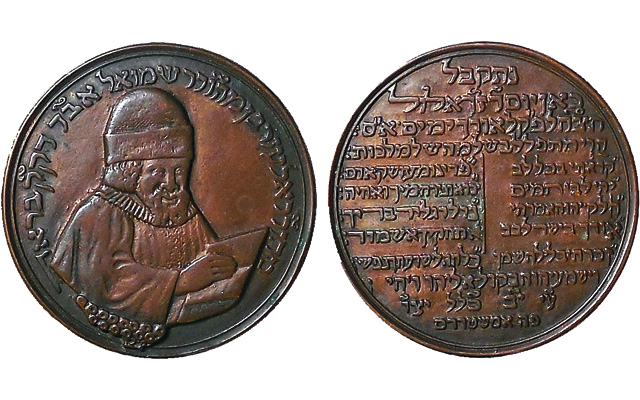 Rare uniface cliches for the world’s first medal created by a Jewish artist highlight William Rosenblum’s auction No. 44A, which closes at midnight Mountain Standard Time May 29.

Items connected to one of the rarest, earliest and most important of all Jewish medals highlight William M. Rosenblum’s latest auction, No. 44A.

Leading the sale are obverse and reverse electrotype cliches (uniface test pieces) of the 1735 medal authorized by the Ashkenazic community in Amsterdam honoring Rabbi Elazar ben Samuel Shmelke of Brody and created by Joel Lippman Levy.

The “bronze white metal” cliches represent only the second time since 1971 that Rosenblum has handled items related to the medal, either cast or struck.

The medal is believed to have been the first medal by a Jewish artist, Rosenblum said.

“Because of the subject matter this was a controversial medal in its time,” writes Rosenblum, in the catalog. “[It is] certainly one of the most important Jewish medals of medieval Europe and of the Netherlands at any time!”

The cliches are estimated to realized $1,000+ in the auction, which closes at midnight Mountain Standard Time on May 29.

The Rosenblum sale offers a varied selection of ancient to modern coins, as well as medals, tokens, bank notes, and related items. Many of the items being offered for sale have a strong Jewish or Holy Land connection.

This is Rosenblum’s 44th year of issuing catalogs, auctions and price lists.

Among the ancient coins being offered are a small but nice selection of coins from Judaea including two rare local issue Judaea Capta issues; a long run of Roman Egypt, Roman Republic and Roman Imperial coin; and a first century Roman lead medallion with a menorah or candelabra on the reverse (this piece has a pedigree to the late numismatist Leo Mildenberg).

The section devoted to exonumia and paper items related to the Holy Land and/or Judaica offers numerous items in all price ranges, dating from 1577 through the first decade of the 21st century.

Two other items worthy of mention are an original strike of the famed 1898 Basel Second Zionist Congress medal and a 1957 plaque given by the Israel Defense forces to the famed conductor and composer Leonard Bernstein. Also being offered are a number of Israel off-metal patterns and test strikes of state medals.

The auction catalog concludes with a selection of Holocaust-related medals and a small offering of numismatic literature including The Art of Engraving by Elizabeth M. Harris, 20 auction catalogs of World Wide Coins of California, and a lot containing 72 issues of World Coins magazine from 1964 to 1969.

The Rosenblum sales do not have a buyer’s fee and items are sold to the highest bid received by closing time.

The entire catalog, with color images can be seen at the firm's website.