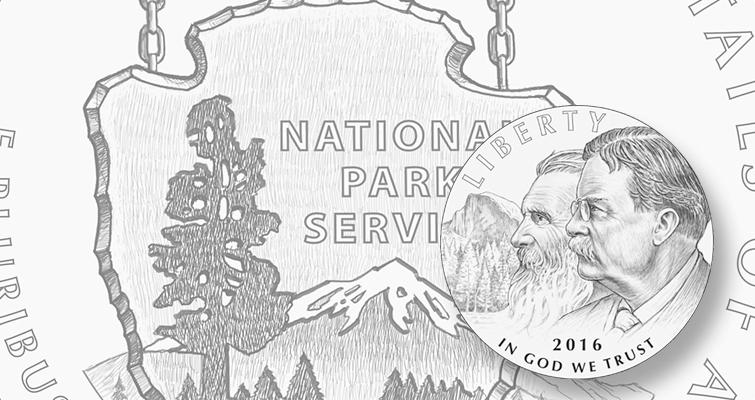 Naturalist John Muir and Theodore Roosevelt appear in conjoined portraits on the 2016 National Park Service Centennial $5 gold half eagle obverse, with Yosemite National Park's Half Dome in the background. 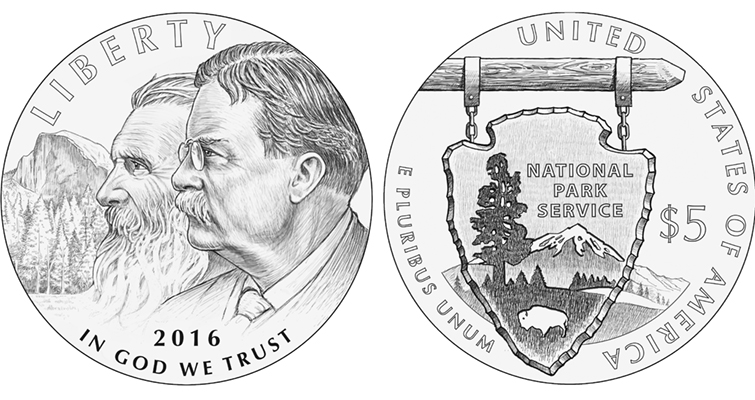 U.S. Mint Sculptor-Engraver Donald Everhart II designed and sculptured the approved obverse and reverse for the 2016 National Park Service Centennial $5 gold half eagle. The obverse depicts naturalist John Muir with Theodore Roosevelt, and the National Park Service logo is on the reverse. 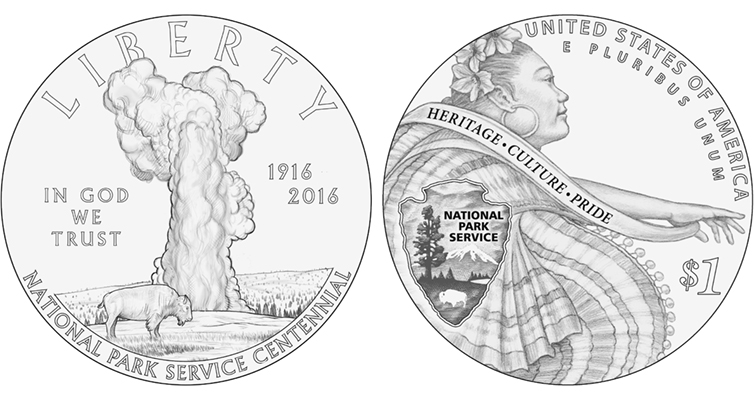 Yellowstone National Park's Old Faithful geyser and a bison are depicted on the silver dollar obverse, with the reverse depicting a Latina Folklórico dancer and the NPS logo, representing the multi-faceted cultural experience found in America’s national parks. 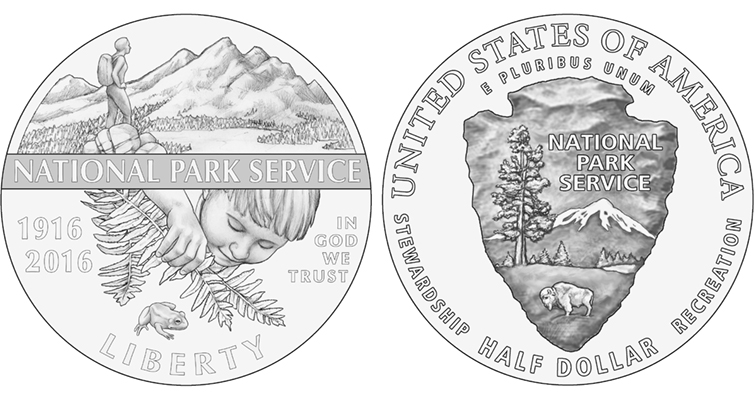 The clad half dollar obverse design features a hiker discovering the majesty of the wilderness and a small child discovering a frog hiding in ferns, celebrating the diversity and breadth of the NPS. The adopted reverse was originally proposed as an obverse.

Approved designs for the 2016 National Park Service Centennial gold $5 half eagle, silver dollar and copper-nickel clad half dollar were unveiled Nov. 19 in ceremonies at 11:30 a.m. Eastern Time at the U.S. Department of the Interior.

The designs were approved Aug. 27 by Deputy Treasury Secretary Sarah Bloom Raskin after consultation with the National Park Service and National Park Foundation, and after all proposed designs were reviewed and recommendations made by the Commission of Fine Arts and Citizens Coinage Advisory Committee.

The enabling commemorative coin legislation authorizes the production and release combined in Proof and Uncirculated versions of up to 100,000 gold $5 coins, 500,000 silver dollars and 750,000 copper-nickel clad half dollars to mark the 100th anniversary of the National Park Service.

Surcharges of $35, $10 and $5 are to be included in the purchase price for each half eagle, dollar and half dollar, respectively.

Net surcharges, after the U.S. Mint recoups all production and associated costs, are to be distributed to the National Park Foundation “for projects and programs that help preserve and protect resources under the stewardship of the National Park Service and promote public enjoyment and appreciation of those resources.”

None of the net surcharges may be used for land acquisition, according to provisions of the coin program’s authorizing legislation.

The adopted reverse features a rendition of the National Park Service logo, a design recommended by the CCAC.

The obverse and reverse of the gold coin were designed and sculptured by U.S.Mint Medallic Sculptor Donald Everhart II.

The silver dollar obverse, designed and sculptured by U.S. Mint Medallic Sculptor Joseph F. Menna, features Yellowstone National Park’s Old Faithful geyser and a bison. This design was the recommendation of the CFA.

The approved reverse for the dollar, designed by U.S. Mint Artistic Infusion Program artist Chris Costello and sculptured by U.S. Mint Medallic Sculptor Jim Licaretz, depicts a Latina Folklórico dancer and the NPS logo, representing the multi-faceted cultural experience found in America’s national parks. The design was originally proposed for the reverse of the silver dollar, but the CCAC had recommended its use as the silver dollar obverse.

The half dollar obverse design features a hiker discovering the majesty of the wilderness and a small child discovering a frog hiding in ferns, celebrating the diversity and breadth of the NPS. The design was executed by U.S. Mint AIP artist Barbara Fox and sculptured by U.S. Mint Medallic Sculptor Michael Gaudioso.

The half dollar reverse design, by AIP artist Thomas Hipschen and sculptured by U.S. Mint Sculptor-Engraver Charles L. Vickers, features a rendition of the NPS logo.

The adopted reverse was originally submitted for review by the Commission of Fine Arts and the Citizens Coinage Advisory Committee as a proposed obverse. The CFA had recommended it for the obverse.

Raskin apparently sidestepped the CCAC's recommendation for the half dollar reverse design depicting a dinosaur skeleton.

U.S. Mint officials have not disclosed the release date, pricing nor packaging options for the National Park Service Centennial coins.

The National Park Service was established by Congress as a bureau under the Department of the Interior under legislation signed into law Aug. 25, 1916, by President Woodrow Wilson. History on the establishment of the National Park system can be found at http://www.nps.gov/aboutus/history.htm. 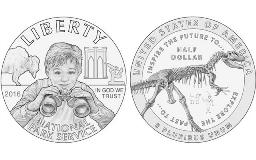 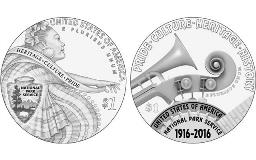 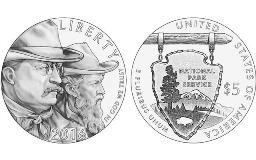