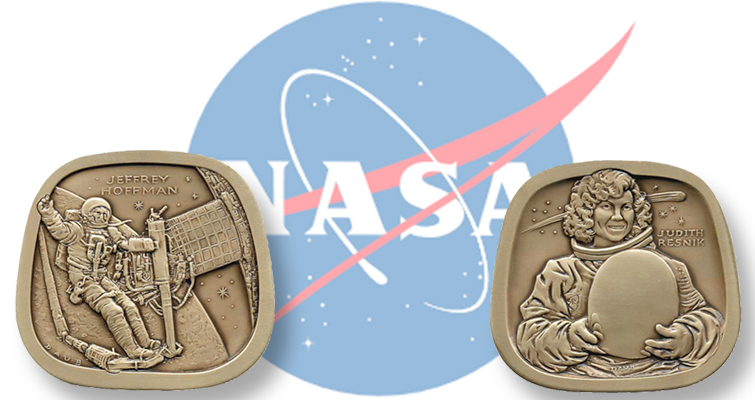 Two NASA astronauts, Jeffrey Hoffman and Judith Resnik, are the subjects of the 2016 Jewish-American Hall of Fame medal.

Two American astronauts are featured on the 2016 medal for the Jewish-American Hall of Fame series.

The newest medal honors Jeffrey Hoffman and Judith Resnik, the newest inductees into the Jewish-American Hall of Fame.

Jeffrey Hoffman is depicted on one side repairing the Hubble telescope; the remote-control mechanical arm that was Resnik’s area of particular expertise in can be seen to his left.

On the other side, Resnik is portrayed holding her helmet; in the background is Halley’s Comet, which she would have photographed during the January 1986 shuttle mission in which she and six other crewmembers died.

Eugene Daub designed the medal, continuing the partnership between the JAHF and Daub that includes nine out of the last 10 medals issued in this series.

When Hoffman read a book saying that no Jew was ever an astronaut or will ever be an astronaut, Hoffman decided to prove that wrong.

He moved to Houston, and became the first astronaut to log over 1,000 hours in space; Hoffman went up into the firmament five times (logging over 20 million miles), including a mission to fix the Hubble telescope.

On one flight, he went up 400 miles at a speed of 18,000 miles per hour, with six other crew members, to repair the Hubble in September 1993. It was an essential mission, because if the Hubble were not repaired, it could not have sent back images that have since altered our knowledge of the universe.

The Hubble mission occurred during Chanukah, and so Hoffman took along a dreidel (a Chanukah top). Images were sent back to mission control, so he decided to explain what a dreidel was. He went on television, talking about Chanukah and spinning the dreidel to demonstrate the game. The little top floated in the cabin, suspended in mid-air in the micro-gravity.

Since 2002, Hoffman has held the title Professor of the Practice in the Department of Aeronautics and Astronautics at the Massachusetts Institute of Technology.

Resnik was a pioneer for women in NASA’s space program and the second American woman astronaut to travel in space.

She received her master’s degree in engineering from the University of Maryland, and began work on her doctorate while employed as a biomedical engineer in the neurophysics lab at the National Institutes of Health. After receiving academic honors for her doctoral work in electrical engineering, Resnik continued to train for the NASA tryouts. In 1978, at 29, she was one of six women accepted into the program.

During her first six years at NASA, Resnik specialized in the operation of a remote-control mechanical arm, used for moving objects located outside the spacecraft. In 1984, on her first space flight on the shuttle Discovery, Resnik was responsible for unfurling a 102-foot-long solar sail that, on future missions, would capture the sun’s energy.

NASA’s Flight 51-L, involving the Challenger, was Resnik’s second space launch. She was to have assisted in photographing Halley’s comet. However, 73 seconds into the Jan. 28, 1986, flight, the space shuttle exploded in midair when faulty O-ring seals on the right solid-fuel rocket booster engine led to failures that allowed propellants to leak from the external tank that fueled Challenger’s main engines. The fuel in the tank exploded, destroying the spacecraft. Along with her six crew members, Resnik died in one of the worst space disasters in history.

Three versions of the trapezoidal-shaped medal are available.

All medals are individually serial numbered and are accompanied by a certificate of authenticity.

Coin World readers can mention the publication for a 20 percent discount.