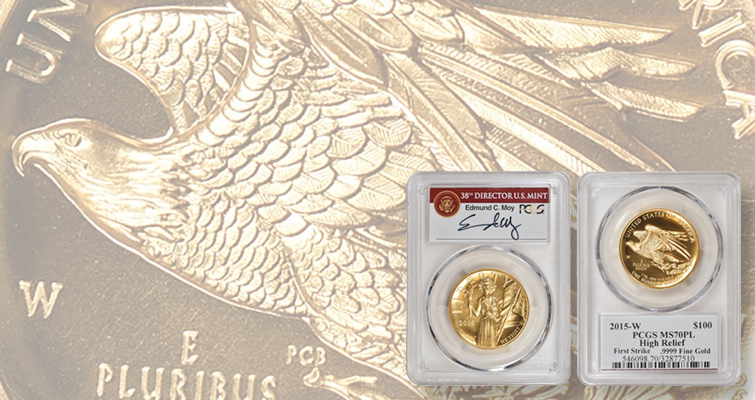 Both Professional Coin Grading Service and Numismatic Guaranty Corp. have created demand for modern coins in slabs with special labels.

Bidders are willing to pay huge prices for some of these coins, such as the $13,310 that a bidder paid for a 2015-W American Liberty, High Relief gold coin at an Aug. 30 online auction by GreatCollections.

Twelve bidders competed for the coin, which is graded Mint State 70 Prooflike and has a label signed by former U.S. Mint Director Edmund C. Moy. It is also a PCGS First Strike label, which designates coins issued in the first 30 days of the Mint’s release. Three bidders were willing to go above the $10,000 level when the auctioneer’s 10 percent buyer’s fee is considered.

On Sept. 6, another example in the same grade and of the same PCGS label type sold for $13,970 in a GreatCollections auction, showing that the Aug. 30 sale was no fluke.

A different example, in a PCGS First Strike label with an American flag, in the same MS-70 Prooflike grade, sold at a single bid of $9,500, or $10,450 with the buyer’s fee in an Aug. 23 GreatCollections.com sale.

Despite these impressive individual sales, the overall collector base has not seemed to warm to the coin issue.

The Sept. 6 U.S. Mint’s sales report records 41,944 units sold, while the Aug. 2 report — reflecting the first few days of sale — recorded 41,930 units sold. The Aug. 9 report showed a total of 42,767 units sold and the number has shown declines in the weeks that followed, since collectors, dealers, and speculators have returned their coins and aren’t ordering more directly from the Mint.

As of Sept. 14, examples are still available from the U.S. Mint for $1,540, and examples with original government packaging or grading MS-69 can be found for around $1,500 on eBay and at some coin shows.

Nearly all examples of the issue have been receiving grades of MS-69 or MS-70 at grading services, with the majority falling at the MS-70 level. Looking at the PCGS population figures also shows that Prooflike examples are decidedly scarce, with PCGS designating less than three percent of its submissions Prooflike according to data as of Sept. 14.

When looking at this coin, a useful comparable may be the 2009 Saint-Gaudens, Ultra High Relief gold $20 bullion coin, which has a mintage of just over 115,000 coins. Today it trades for more than its issue price, and unlike the 2015-W American Liberty issue, that has a limited mintage of 50,000 coins, the 2009 Ultra High Relief coin had no mintage limit.

Today, an MS-69 coin sells for around $2,000, MS-70 pieces can be found for a few hundred dollars more and Prooflike examples command a premium.