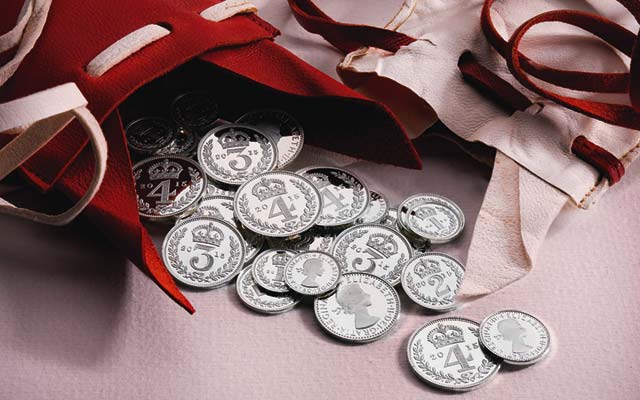 Apart from the monarch’s effigy, the design of all Maundy denominations has not altered since 1822 — the reverse features a numeral denoting its face value within a wreath. Although the queen’s fifth coinage portrait was unveiled earlier this year, her Maundy money still bears her first portrait by Mary Gillick. 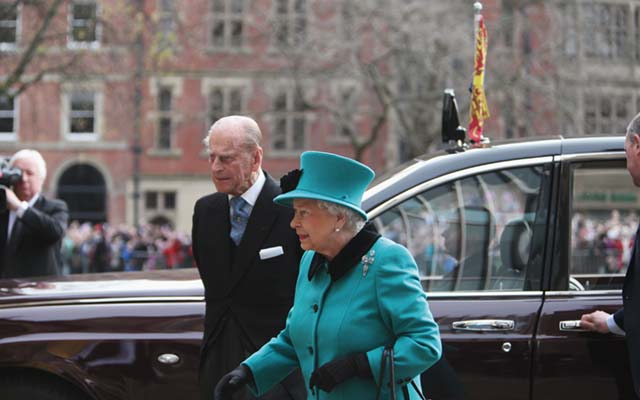 Queen Elizabeth II and Prince Philip leaving the Bentley state limousine, an armored vehicle that is longer, taller, and wider than a standard Bentley. 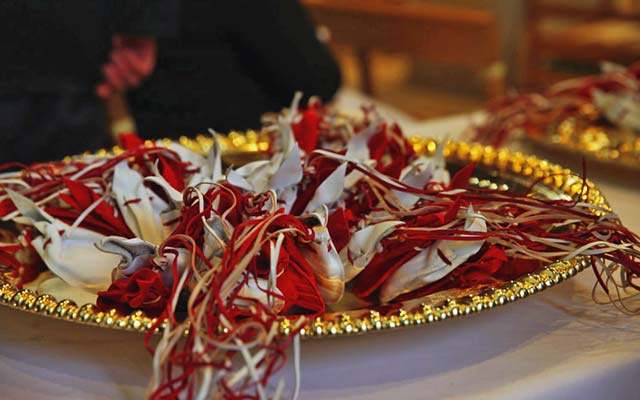 The Maundy purses were placed on a silver gilt salver that forms part of the Royal Regalia. Yeomen of the Guard carry the salvers above their heads until the purses are required for distribution by the queen. 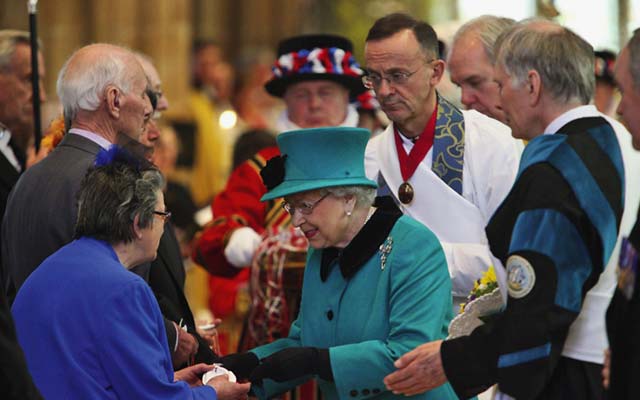 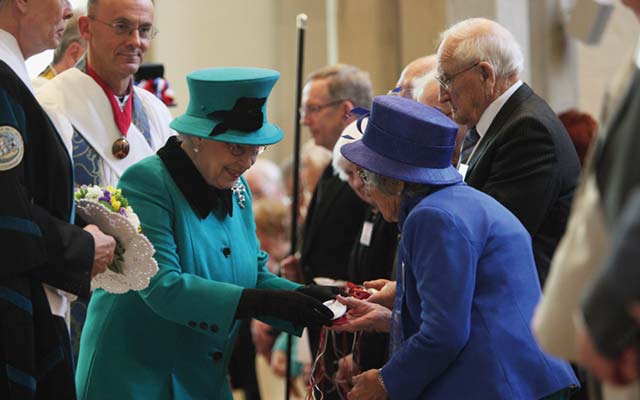 Queen Elizabeth II seems to genuinely enjoy her role in the Maundy Service. 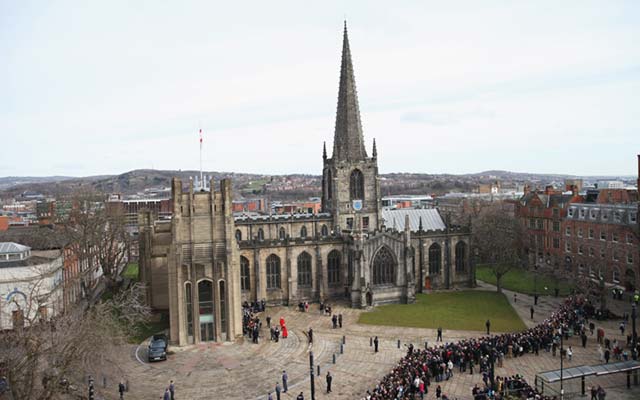 Sheffield Cathedral, which was a parish church, dates from circa 1430. The building was elevated to a cathedral in 1914. 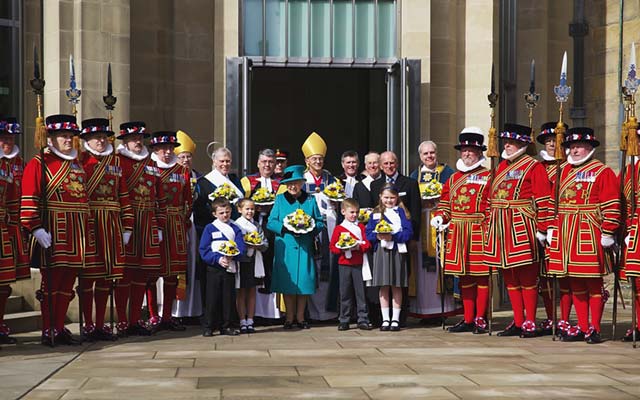 The dedication of Queen Elizabeth II to her duties is well-known. She is the most widely traveled head of state in history and was the first monarch to circumnavigate the globe.

Despite celebrating her 89th birthday on April 26, she has amazing stamina, as indeed does her husband Philip, the Duke of Edinburgh, who celebrates his 94th birthday on June 10.

The queen attended her first Maundy service at Westminster Abbey as Princess Elizabeth in 1935, aged 8 years. During the 64 services held during her reign, this year’s is the 60th at which she has presided.

The royal couple had a busy day April 2, known as Maundy Thursday, the day before Good Friday. They left Buckingham Palace by car, traveling to a railway terminus in north London. From there, they rode the Royal Train to Sheffield in South Yorkshire to attend the Maundy Service at the city’s Church of England cathedral. With the usual immaculate precision, the train arrived at Sheffield station where the queen’s claret and black Bentley state limousine awaited to transport Queen Elizabeth and Prince Philip to the cathedral, to join the Maundy Procession as it entered the cathedral at exactly 11 o’clock.

What is the Maundy service?

So, what is the Maundy service? It is a long-standing tradition in Britain for the reigning monarch to distribute coins to a select group of citizens, in a ceremony held just before Easter.

The word “Maundy” derives from the Latin “Mandatum,” meaning “commandment.” Immediately after the Last Supper, Jesus washed the feet of his disciples, and as recorded in John 13:15, he said to them, “I have set you an example: you are to do as I have done for you.”

Afterwards he delivered his commandment, “Love one another; as I have loved you, you are to love one another” (John 13:34). This act of humility by Jesus is still recalled by churches in many lands.

In England, the Maundy service can be traced back to the fifth century A.D. The pedilavium — or washing of the feet — followed Holy Communion on the Thursday before Easter. The earliest known ceremony at which the monarch distributed money is 1210. In this year King John (1199 to 1216) presented 13 silver pennies to each of 13 “paupers” at Knaresborough in Yorkshire, as well as clothes, a belt, and a knife. The king’s generosity did not stop there.

We learn from a document, the Rotulus Misae, which is an account of the daily expenses at the Court, that there was “on Good Friday at the same place, [a meal] for one thousand poor people.”

The first record of an English monarch to perform the pedilavium at the Maundy ceremony was Edward II (1307 to 1327), who washed the feet of 50 poor men on March 21, 1326. His successor, Edward III (1327 to 1377) not only performed the pedilavium and distributed money, but in 1361 started the tradition of giving gifts of clothing and food.

The last monarch to wash the feet of the recipients was William III in 1698.

Other changes took place over the years. As the scramble for clothes resulted in unseemly arguments and even fights, not to mention disrobing in public to try on garments, the clothing was initially replaced with cloth, and then with a monetary payment. The feeding of the recipients with a meal was replaced with food to take away, but as the recipients then frequently sold the groceries and fresh items for a pittance, this was replaced with a cash payment.

For a period of 233 years from 1698, the monarch did not participate in the Maundy proceedings. However, periodically they may have attended to observe.

We know that certain monarchs took an interest.

For example, Queen Victoria insisted that the service was always held in Westminster Abbey, while her son Edward VII insisted that the selling of additional and undistributed Maundy coins to the public be stopped so that they would have a higher value to recipients who decided to sell their coins to a dealer.

It was the queen’s grandfather King George V who decided to resurrect the sovereign’s participation in the ceremony. So when the queen attended her first Maundy service in 1935, she watched her grandfather distribute the Maundy.

As monarch, she has brought changes too, rotating the ceremony throughout provincial cathedrals and abbeys in the United Kingdom on alternate years, generally (but not always) using Westminster Abbey for events in London.

All the clerics were in their ceremonial ecclesiastical robes; the children of the Chapel Royal choir wore their gold-braided red tunics and breeches, while the gentlemen wore red cassocks. Then of course there were the magnificently attired Yeomen of the Guard, which is the bodyguard of the British monarch. It is the oldest British military corps in existence.

The Yeomen took up positions all around the cathedral, each holding a Yeomanry standard, while a small group carried the leather bags containing the distribution on antique silver gilt salvers that form part of the Royal Regalia from the Jewel House at the Tower of London. The royal party and the clerics carried exquisite nosegays, which are posies of sweet-smelling flowers and herbs. In the olden days these were to help combat the stench of the unwashed as well as serving as a protection against disease.

In modern times, recipients are chosen not because of their financial need, but for their service to the church and the community. The qualifying age for a recipient is 65, with the average age being from 80 to 85. As the queen was in her 89th year at the time of the ceremony, 89 men and 89 women each received 89 pence in Maundy money, the denominations being 4-, 3-, 2- and 1-penny pieces. These are presented in a white leather purse.

Each recipient receives a red purse that contained £5.50. This historically represents £3 for clothing, £1.50 for food and £1 for “redemption of the gown.”

As no gown was owned by Edward VI (1547 to 1553), who was only 10 when he officiated at his first Maundy service, he gave £1 in currency to each of the 12 recipients instead. Although technically there should have been only 10 men, the number was increased to represent Christ’s disciples.

Queen Mary (1553 to 1558) reinstated the custom of giving one of her gowns, as initially did her half-sister Elizabeth I (1558 to 1603). Elizabeth I is reputed to have had 366 gowns, an enormous number for the period. However, in 1572, she substituted a monetary allowance for the gown. Whether she could not bring herself to part with an item of her apparel or rather appreciated that an elaborate gown was of no use to one of her subjects who effectively was a poor female peasant is unknown.

However, what we do know is that from that date, each recipient received a monetary allowance of 20 shillings (one pound sterling) in lieu of one receiving “the Maundy gown.”

This year monetary gift was paid with a £5 coin commemorating the death of Sir Winston Churchill and a 50-penny coin marking the 75th anniversary of the Battle of Britain.

So what did the recipients think to it all?

Denis Gratton of Sheffield aged 91, a D-Day veteran said: “It was quick. I am not very good at hearing. She did say something, but I am not sure what it were.”

Patricia Durkin, aged 72, responded with: “It was brilliant, absolutely wonderful. When I got there, the atmosphere was tremendous.”

The recipients were from all over South Yorkshire and included 82-year-old June Jordan from Campsall, Doncaster. She had been involved with her local parish church of St. Mary Magdalene for more than 50 years.

She said: “We were all made to feel so special. They reserved a special tram for us because of the streets being closed, I felt so honored to meet the Queen. She has such a lovely smile and when she gave us the Maundy money you could tell it was special for her too.”

Maundy money is unique to Britain. It has a long and fascinating history and it is not surprising that it captures the imagination of numismatists as well as those with no special interest in coins. Maundy Thursday is a very special day in the British calendar for many people.