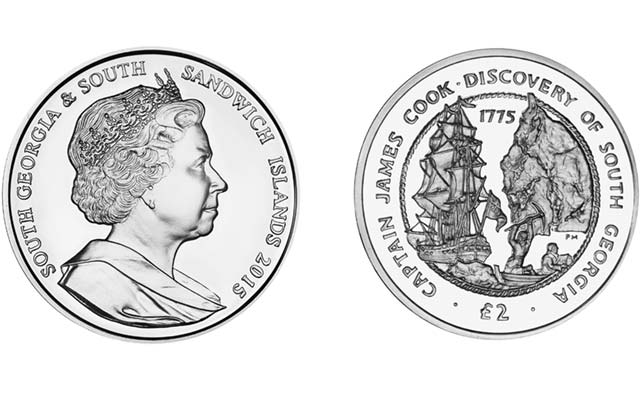 Cook’s discovery of the island of South Georgia occurred 240 years ago, an event now being celebrated on coins.

The Pobjoy Mint, cooperating with South Georgia & South Sandwich Islands, is marking the anniversary with a noncirculating legal tender £2 coin.

British explorer, navigator and cartographer Capt. James Cook made the first landing, survey and mapping of South Georgia. Cook traveled to the island aboard the HMS Resolution. As instructed by the Admiralty on Jan. 17, 1775, he took possession for Britain and renamed the island “Isle of Georgia” for King George III.

Cook’s expedition circumnavigated the globe at an extreme southern latitude, becoming one of the first to cross the Antarctic Circle. Today January 17 is celebrated at Possession Day, a public holiday in South Georgia & South Sandwich Islands.

The coin features an image of Captain Cook’s ship HMS Resolution in the waters of Antarctica. A large iceberg can be seen in the background, with a sailor from the ship hacking at a smaller iceberg in the foreground to obtain fresh water for the Resolution.

The coin is available in Uncirculated copper-nickel and Proof .925 fine silver versions.

The copper-nickel coin has unlimited mintage and retails for $16.95.