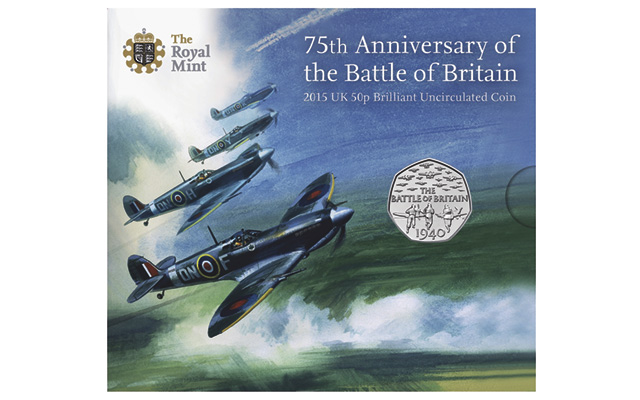 Packaging for the 2015 Battle of Britain 50-penny coin shows some of the air power used to defend Britain from German attack. 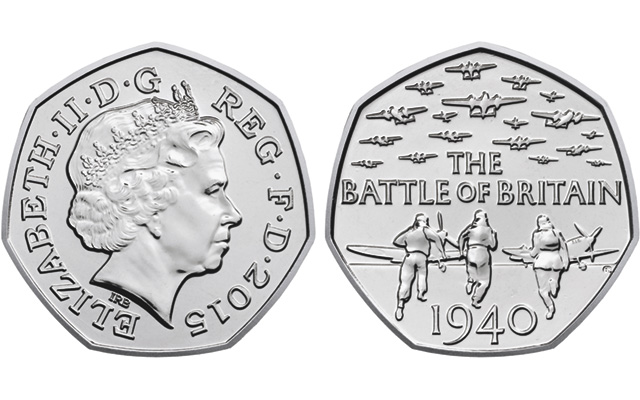 A new circulating commemorative 50-penny coin from the United Kingdom marks the 75th anniversary of the Battle of Britain.

In the summer and fall of 1940, German and British forces took to the skies to contest air superiority, and Germany’s defeat forced Adolf Hitler to cancel Operation Sea Lion, a dual land-and-air assault on the United Kingdom.

The defenders won the Battle of Britain, giving rise to the famous quote from Sir Winston Churchill, “Never in the field of human conflict was so much owed by so many to so few.”

A new copper-nickel 50-penny coin from the Royal Mint showcases some of those “few” in a reverse design from sculptor Gary Breeze.

“The scrambling airmen, running with enthusiasm to their potential deaths to protect us is an evocative image,” Breeze said in a press release. “Coming towards the men is a swarm of aircraft. ... I wanted to illustrate that threat and sense of danger. I would like people to be reminded of the selfless sacrifice of the ‘Few.’?”

Ian Rank-Broadley’s effigy of Queen Elizabeth II appears on the obverse of the coin, which weighs 8 grams and measures 27.3 millimeters in diameter.

A Brilliant Uncirculated version is available in a colorful pack for £8; other packaging options include a range of annual sets.

Complete information is available at the Royal Mint website.