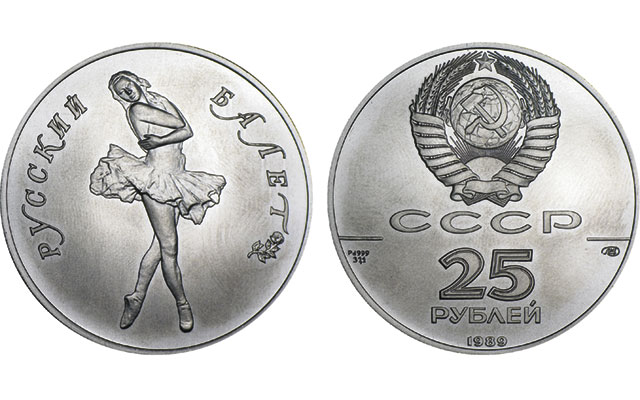 The Russian Ballerina coins introduced in the 1980s are probably the most well-known bullion coins struck in palladium.

Palladium doesn’t seem to get much respect.

While the metal is one of four precious metals regularly traded on the commodities markets, bullion and commemorative coin and bars struck in palladium for investment and collector purposes are nowhere near as available as are bullion products made of gold, platinum and silver.

Discovered in 1802 by English chemist and physicist William Hyde Wollaston while employing a process to purify platinum, palladium was sparingly used in the world's coinage until the 1980s with the introduction of Russian Ballerina bullion coins in various sizes.

Palladium is useful in a number of industrial applications, primarily as an autocatalyst, in electronics and in dentistry.

Some success was enjoyed with the production of the Russian Ballerina palladium bullion coins, albeit in somewhat limited numbers. The Royal Canadian Mint introduced its Maple Leaf .9995 fine palladium bullion coins in 2005 and continued production through 2011. A number of other countries have issued Proof commemorative coins in palladium, and privately issued rounds and bars of various sizes and weights are available.

A U.S. palladium bullion coin has never materialized, however, since a marketing study authorized under the act determined such a coin would be unprofitable.

Although palladium is considered rarer than platinum, gold and silver, it doesn't enjoy the associated value differential because of that rarity.

Collectors and investors interested in palladium issues can find palladium options from a number of numismatic retailers, including online vendors such as APMEX and Northwest Territorial Mint, as well as on eBay.