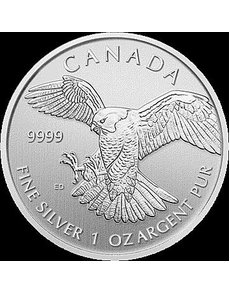 The Royal Canadian Mint has begun a four-coin Birds of Prey series of 1-ounce .9999 fine silver $5 bullion Maple Leaf coins. First in the series is the Peregrine Falcon coin, released in Berlin during the World Money Fair 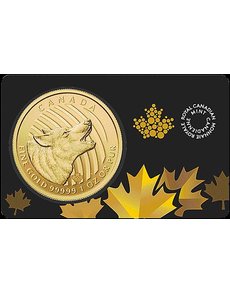 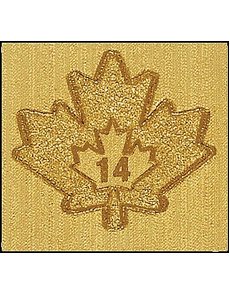 Berlin may be an unfamiliar setting for Canadian wildlife, but on Feb. 5 the Royal Canadian Mint used the World Money Fair in that city to showcase Canada’s new silver and gold bullion coins featuring popular animals.

The RCM has launched a four-coin Birds of Prey series of Maple Leaf 1-ounce .9999 fine silver $5 coins, with the first subject the peregrine falcon.

Also making its debut at the show — the largest in Europe and perhaps the world — was a new .99999 fine gold $200 coin, the first in a Call of the Wild series that continues the RCM’s recent practice of issuing “five-nines” 1-ounce gold bullion coins.

The Birds of Prey series is planned for two years, with two coins released each year in 2014 and in 2015. One coin was unveiled during the Berlin show.

Like the six coins in the Canadian Wildlife series that preceded the Birds of Prey series, each issue in the new series has a mintage limit of 1 million coins.

The Falcon coin reverse was designed by noted wildlife artist Emily Damstra and shows the falcon with its talons open.

The first release in the Call of the Wild series of 1-ounce .99999 fine gold bullion coins features a Howling Wolf design.

Designed by Pierre Leduc, the wolf is set against lines representing the sound waves of his unmistakable call.

The coin is presented in plastic “credit card-style” packaging and will be produced to demand. RCM Director of Bullion and Refinery Services Chris Carkner told Coin World that the special packaging was developed at buyer request because gold coins of such high fineness are extremely sensitive.

The presentation of the coins is also more pleasant in the new packaging, Carkner said.

The three-coin Call of the Wild series continues with issues in 2015 and 2016.