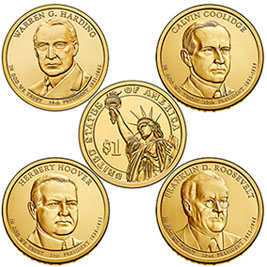 The 2014 Uncirculated set is the eighth such set released by the Mint and is listed at $16.95. That price does not include shipping and handling.

Each coin's obverse features a portrait of a respective commander in chief along with the inscription IN GOD WE TRUST, the presidential sequence number (Harding is the 29th president, for example) and his years in office. The reverse of each coin features the Statue of Liberty.

The years covered by the terms of the four presidents featured in the Uncirculated set span from 1921 to 1945.