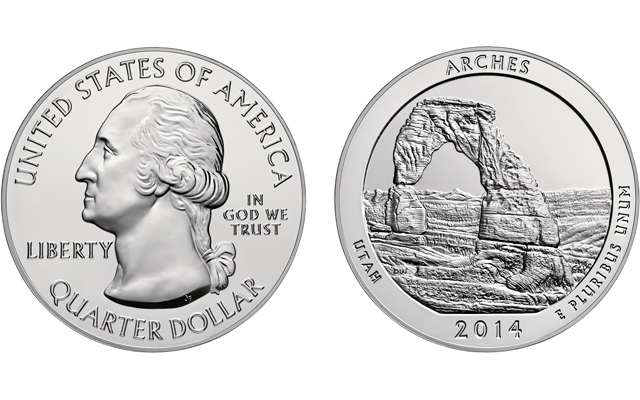 The latest 5-ounce silver bullion quarter dollar to be released under the America the Beautiful program is the 2014-dated coin honoring Arches National Park in Utah.

Sales by the United States Mint for the first three America the Beautiful 5-ounce silver bullion quarter dollars are below those for the 2013 issues but in line with 2012 releases.

The Schuler coinage press dedicated to the production of the 3-inch .999 fine silver bullion coins at the Philadelphia Mint returned to replenishing the U.S. Mint’s inventory of the Shenandoah National Park bullion coins after officials announced June 23 the available supply was depleted. Sales had reached the 20,000-coin level at the time of the announcement.

The coins are 5-ounce silver versions of the 24.3-millimeter quarter dollars struck for circulation and numismatic sets. In addition to the bullion pieces, Uncirculated 5-ounce silver numismatic versions bearing the Philadelphia Mint’s P Mint mark are sold by the U.S. Mint directly to the public.

The bullion versions offered through the authorized purchasers bear no Mint mark.

Both the bullion and Uncirculated Mint-marked coins are struck on the same dedicated press at the Philadelphia Mint.

The highest sales thus far for the bullion issues have been recorded for the 2011 Gettysburg National Military Park and Glacier National Park issues with 126,700 coins each.

Sales for the inaugural five 2010 bullion releases, all of which sold out, were limited to 33,000 coins each, because production was being split between the bullion and Uncirculated versions.

Just days before the introduction of the 2010 coins, sales were suspended Dec. 6, 2010, amid complaints of price gouging by some authorized purchasers offering the coins individually and in five-coin sets.

U.S. Mint officials reopened sales Dec. 10, 2010, but with restrictions imposed. Coins had to be sold in the United States only; had to be sold directly to the public, not dealers; and could not be sold for more than 10 percent above what the authorized purchaser acquired the coins for from the Mint.

After the Mint’s restrictions, prices authorized purchasers were allowed to charge for their sets were limited to around the $900 to $950 level during the second offering. Before the limits were imposed, the pricing, which had incited collector complaints, was around $1,395.

Soon after the coins hit the secondary market, single coins, containing approximately $150 worth of silver, were selling at up to $500 each. Five-piece sets were being hawked for up to $2,500.