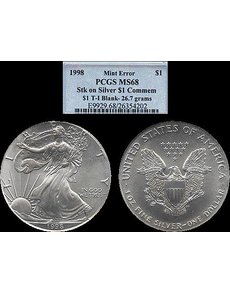 This 1998 American Eagle silver bullion coin has been certified by PCGS as having been struck on a planchet intended for a commemorative silver dollar. The coin was likely struck at the San Francisco Mint.

Collectors should start paying more attention to any 1998 American Eagle silver bullion coins in their collections. An example of the coin has been found struck on a commemorative silver dollar planchet.

The wrong planchet error is the only example confirmed so far to have been struck on a .900 fine silver planchet instead of the intended .999 silver planchet. The coin is certified and graded Mint State 68 by Professional Coin Grading Service.

The wrong planchet error is in the collection of Washington collector Deb Biebesheimer.

Biebesheimer, who moved to the West Coast earlier this year from New York, said she purchased the coin May 10 from Collectors Alliance in Lakewood Township, N.J. The coin had already been certified as a wrong planchet error when she purchased it.

She initially kept quiet about the purchase, and said she was “a little paranoid about telling people I even had this pricey coin.” Biebesheimer said she has since shed her jitters over acquiring the coin and begun talking with other collectors about the coin.

“I find people are really interested,” Biebesheimer said. “I have also done more in-depth research on error coins and have come to realize how cool it is to have a coin where you can easily see the errors and understand how they manifested during the manufacturing process.

“I want to be a good steward for this bit of history.”

Biebesheimer said she started collecting coins as a youth, but did not get heavily into the hobby until several years ago, after she retired.

The foundation of her resurrected numismatic collecting habits rested on about a dozen Morgan dollars her father had given her.

Biebesheimer said she expanded her Morgan dollar collection, eventually branching out into other series, including American Eagles.

Justin Duane, sales manager for Collectors Alliance, said Oct. 24 that he purchased the coin from another dealer who offered the uncertified 1998 silver American Eagle to him during the May 9 to 11 American Numismatic Association National Money Show in New Orleans. Duane did not disclose the name of the dealer from whom he purchased the wrong planchet error nor the purchase price.

Duane said he did not know who discovered the wrong planchet error as such, or when, nor how it came to be in the possession of the unnamed dealer.

After purchasing the wrong planchet error from the unnamed dealer, Duane said he took the coin at the show to error coin specialist Fred Weinberg from Fred Weinberg & Co., Encino, Calif.

Weinberg said he first noticed the coin was missing the customary reeding on the edge. When he weighed the coin and it registered between 26 and 27 grams, Weinberg said he knew the planchet was originally intended for a commemorative silver dollar.

Weinberg, who is a PCGS consultant for attributing and authenticating error coins, submitted the coin to PCGS for certification on behalf of Collectors Alliance.

Once certified, the wrong planchet error was offered to Biebesheimer, Duane said.

The PCGS grading insert for the wrong planchet error identifies the weight at 26.7 grams.

The intended diameter of commemorative silver dollars is 1.5 inches (38.1 millimeters) and the weight legislated at 26.73 grams.

Those specifications are traditional and also apply to the planchets used for striking Morgan dollars and Peace dollars.

In contrast, the American Eagle 1-ounce silver bullion coins measure 40.6 millimeters in diameter and are intended to weigh 31.01 grams.

The difference in diameter between an American Eagle planchet and a commemorative planchet explains the absence of edge reeding (normally imparted by the edge collar die) for the 1998 wrong planchet error, Weinberg said.

Silver American Eagle bullion coins do not have Mint marks, so for older pieces from years when more than one facility struck the coins during a calendar year, the origin cannot be identified.

From May 2011 to the present, silver American Eagle bullion coins have been struck at both West Point and San Francisco.