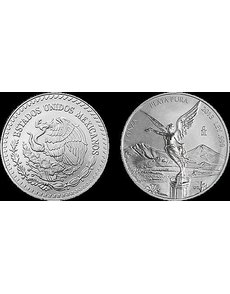 Mexico’s 2013 Libertad bullion coin program is now available earlier than ever. A U.S. distributor has most of the silver coins, like the 1-ounce version here, already available.

The 2013 releases from Mexico’s flagship bullion program, the Libertad, are now available, earlier in the year than ever before.

According to Pat Stovall of U.S. distributor Lois & Don Bailey & Son Numismatic Services, the Bank of Mexico was able to resolve an internal legal issue that restricted production of the coins to the calendar year in which the coins were to be released, preventing coins from being produced in the previous year as many world mints customarily do. The wording of the decrees controlling the Casa de Moneda (the Mexican Mint) has been modified, permitting earlier production and, likewise, earlier sales. The coins were released Jan. 7.

Bullion and Proof versions are generally offered annually, and individual BU silver examples are now available from Stovall. Individual Proof silver and gold examples will be available in mid-March, and sets of Proof Libertad silver and gold coins are made available only through European distributors.

The Libertad has always shown the Angel of Liberty on the reverse, though variant designs have been used. The current design, introduced in 1996, features a three-quarters view of the Angel of Liberty, with two volcanoes in an otherwise barren landscape behind her. The obverse shows Mexico’s coat of arms, an eagle perched on a cactus with a snake in its mouth.

The .999 fine silver coins were the first Mexican coins to be composed of pure silver.

In 1991, fractional Libertad .999 fine silver coins of twentieth-, tenth-, quarter- and half-ounce sizes were introduced. Multiple ounce sizes followed in 1996, when 2- and 5-ounce coins were struck, with 1-kilogram coins first issued in 2002.

Gold Libertads are offered in 1-, half-, quarter- and 10th-ounce sizes, and all are composed of .900 fine gold.

One quirk of the Libertad program is that the coins do not have denominations. Another is that no mintage limits are publicly identified.

Stovall has pricing details for four separate silver coin products, though prices may fluctuate with the precious metal spot price.