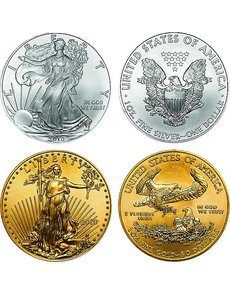 The U.S. Mint will begin accepting orders for 2011 American Eagle 1-ounce silver and gold bullion coins beginning Jan. 3. Any 2010 coins still in inventory at that time will continue to be released until the inventory is depleted.

The date is two weeks earlier in the new year than for the beginning of placement of orders for the 2010 bullion coins (which was Jan. 19, 2010).

“Any remaining inventory of 2010-dated coins in January 2011 will be sold on a ratio basis when ordering 2011-dated American Eagle Gold and Silver Bullion Coins. This will continue until the 2010 inventory is depleted.

Until 2009, Mint officials had accepted orders for the next year’s American Eagle bullion coins in December, for delivery in early January. The Mint would be begin striking the next year’s coins well before the start of the new calendar year in order to build inventory to meet the demand.

However, because of record demand for American Eagle silver bullion coins in 2009, the U.S. Mint delayed accepting orders for the 2010 1-ounce silver and gold bullion coins until Jan. 19, 2010.

Production of the 2009 coins ended Dec. 31, with 2010 coin production resuming the same day. Sales of the 2010 coins began once inventory had been built to levels sufficient to meet the demand for the new coins.