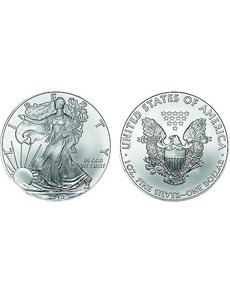 The final mintage of 34,764,500 for the 2010 American Eagle 1-ounce silver bullion coins represents the highest mintage for the series.

The final mintage figures for the American Eagle silver coins as well as for American Eagle 1-ounce and tenth-ounce .9167 fine gold coins were released by the U.S. Mint April 1, two-and-a-half months later than usual.

Final mintage figures generally have been released in the second or third week of January following the close of the previous calendar year.

Production for 2010 American Eagle bullion coins ended as of Dec. 31.

The mintage figures released for the 2010 half-ounce and quarter-ounce gold bullion coins, also published here, are not final because the coins are still being sold to authorized purchasers along with 2011-dated coins.

Record low and high final mintages for all of the gold bullion versions, with the low listed first followed by the highest, and noted by date, are:

The high mintages for the 1999 1-ounce and tenth-ounce gold coins are attributed to investment concerns over the Y2K millennium computer bug, which never materialized.

1986 production was executed during the final four months of that calendar year.

Monthly sales totals, posted cumulatively on a daily basis over the Mint’s Web site at www.usmint.gov for American Eagle gold and silver bullion coins (American Eagle platinum bullion coins have not been offered since the 2008 production year), may include coins dated from more than one calendar year and do not represent mintages for a particular date. ¦