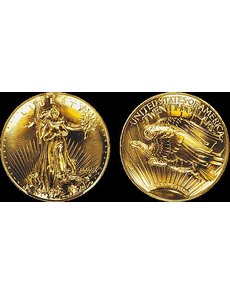 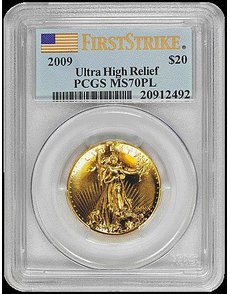 The record-breaking 2009 Ultra High Relief double eagle is one of only 26 coins certified, as of Sept. 30, 2012, as Mint State 70 Prooflike First Strike by PCGS.

A 2009 Saint-Gaudens, Ultra High Relief gold $20 double eagle auctioned Sept. 30 brought a price believed to be the highest paid for an example of the issue.

An unidentified East Coast collector paid $20,903.30 to acquire the coin in an online sale conducted by GreatCollections (www.greatcollections.com). The price included a 10 percent buyer’s fee.

The coin is graded Mint State 70 Prooflike, by Professional Coin Grading Service, and encapsulated by the third-party grading service with a First Strike designation on the grading insert.

GreatCollections President Ian Russell said Oct. 1 that to his knowledge, the price paid for the coin is the highest recorded.

“I don’t know of any other auction realizations close to this amount for this issue,” Russell said.

Russell said the coin sold by GreatCollections possesses the “trifecta” of having the highest numerical grade attainable at MS-70; the Prooflike superlative, having a superior finish bordering on Proof quality; and the First Strike designation, for being among the first examples delivered to collectors during the first 30 days of shipments from the U.S. Mint after the start of sales.

As of the Sept. 30 close of the GreatCollections auction, PCGS had certified just 26 coins PCGS MS-70 Prooflike First Strike.

The issue represents a Mint reproduction of one of the variants of sculptor Augustus Saint-Gaudens’ 1907 Ultra High Relief, Roman Numerals double eagle.