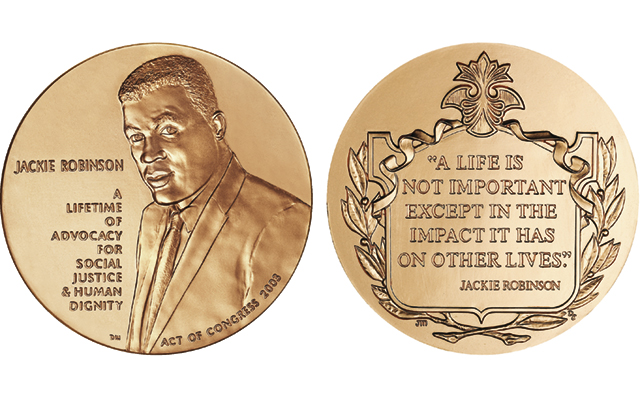 Bronze medals bearing the same designs that appear on the gold congressional medal awarded in honor of Jackie Robinson pay tribute to his humanitarian efforts.

Like other sports, baseball is a frequent theme on medals, awards and other forms of exonumia. Some medals celebrate baseball players who tore down cultural barriers — racial, ethnic and religious.

Jackie Robinson in 1947 became the first African-American to play on a modern Major League Baseball team. Robinson’s incredible skill on the ball field playing for the Brooklyn Dodgers along with his ability to ignore (at least outwardly) the racist taunts thrown his way by other players and some in the public helped make him an American hero.

In 2003, Congress approved legislation for a gold congressional medal honoring Robinson, not only for breaking the color barrier but for his many humanitarian achievements.

Donna Weaver, then a Mint sculptor-engraver, designed the obverse. It features a portrait of Robinson, with the inscription JACKIE ROBINSON appearing to the left of the portrait, followed by A LIFETIME OF ADVOCACY FOR SOCIAL JUSTICE & HUMAN DIGNITY. The inscription ACT OF CONGRESS 2003 is featured on the lower rim.

President George W. Bush and members of Congress presented the gold medal to Rachel Robinson, the ball player’s widow, on March 2, 2003, in the Capitol Rotunda. The U.S. Mint began selling the bronze versions of the medals the same day.