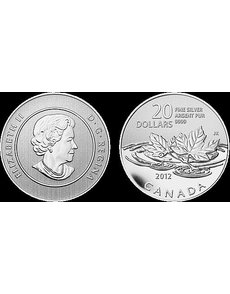 Canada’s latest “$20 for $20” coin marks the final circulation of the 1-cent denomination.

The Royal Canadian Mint’s latest “$20 for $20” coin — a silver coin that is sold at face value, plus shipping — bids “Farewell to the Penny.”

The piece is the fifth Specimen Finish .9999 fine silver $20 coin in a series that began in 2011, with each coin featuring a different theme. The new design celebrates Canada’s 1-cent coin, which will no longer circulate after Feb. 3.

Jesse Koreck’s commemorative design shows the iconic George E. Kruger-Gray maple leaf-twig design that has appeared on all 1-cent coins since 1937 (except for the 1967 Centennial design), but gently landing on water, as at the end of the season.

Like the previous four coins in the series, the latest .9999 fine silver $20 coin contains 7.96 grams of pure silver (slightly more than a quarter-ounce) and the coin measures 27 millimeters in diameter.

Sales of the first release were restricted to Canadian residents, but all subsequent releases have been opened to U.S. sales.

Although the coins are being sold at face value, buyers must pay shipping fees. Shipping costs vary, ranging from $2.99 to $15, depending on method and delivery time.

RCM officials say that a holiday theme will appear on the next coin in the series, due for release in November.

The U.S. prices for collectors in the United States buying directly from the RCM fluctuate with the exchange rate, calculated at the time of purchase

Distributors in the United States and Canada may also stock the coin, but they would establish their rates.