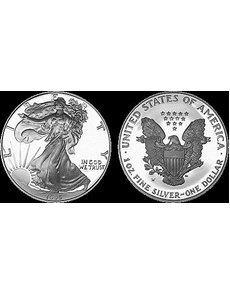 It’s hard to believe that the Proof 1995-W American Eagle 1-ounce silver bullion coin was issued 17 years ago. With a mintage of just 30,125, it remains the lowest-mintage silver American Eagle and a coveted modern key issue.

To put its mintage into perspective, 100,000 of the five-coin 2011 American Eagle 25th Anniversary Silver Coin sets were produced. Yet if that set’s sales process could be characterized as a frenzy, the set containing the Proof 1995-W American Eagle silver coin would be better called a slow burn.

It was included as a “complimentary” piece in a special five-coin set honoring the 10th anniversary of the American Eagle bullion coin program. The set also contained four Proof American Eagle gold bullion coins. The set had an authorized mintage of 45,000 sets, but failed to sell out.

Collectors were critical of the high cost of the set. A large number of collectors collected the American Eagle silver coin but many could not afford the $999 price for the set.

In a June 26, 1995, Guest Commentary in Coin World, then-Mint Director Philip N. Diehl addressed the complaints, noting that while the Mint received “a few dozen calls and letter of complaint,” the 16,000 orders received to that date counterbalanced this.

Diehl wrote, “Considering that the price of making a complaint is the cost of a postage stamp whereas the price of a 10th Anniversary American Eagle Proof set is $999, a 200-1 ratio of orders to complaints would seem to be a strong vote of approval from our customers.”

On Sept. 11, 1995, Coin World reported that Diehl suggested a strategy for collectors to obtain a 1995-W silver issue at a “bargain” price of between $50 and $100. He urged collectors to order the sets using credit cards, sell the gold coins, pay the debt with the proceeds and keep the dollar. He characterized this strategy as, “very do-able for those on a limited budget” adding, “It’s a low-risk or no-risk opportunity.”

Collectors with the prescience to purchase the set in 1995 have been rewarded.

This issue is plagued with spotting and other minor problems, and Proof 70 Deep Cameo examples are extremely rare. On March 15, 2010, an example graded Proof 70 Deep Cameo by Professional Coin Grading Service realized an astounding $46,000 when offered in a Teletrade auction.

When buying 10th Anniversary sets, collectors should inspect the dollar to make sure it has the W Mint mark, as many sets have had the dollar removed and replaced with a Proof 1995-P issue, which was sold individually.