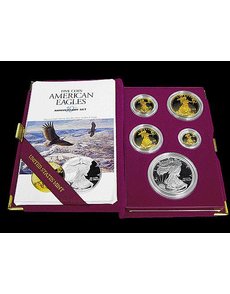 Knowing how many 1995 American Eagle 10th Anniversary sets remain intact is difficult, if not impossible, as many were broken up to have the scarce Proof 1995-W American Eagle silver dollar graded.

With only 30,125 strikes, the Proof 1995-W American Eagle silver dollar is the key date of the series. As such, many were broken out of their sets for grading purposes.

By accessing the population reports of Professional Coin Grading Service, Numismatic Guaranty Corp., ANACS and other third-party grading services, it is possible to tally the number of Proof 1995-W silver dollars those services graded and encapsulated, but an estimate of how many intact 10th anniversary sets survive based on that number would be inaccurate, primarily because it is not known how many coins among the recorded submissions were resubmitted and resubmitted again for third-party grading.

Not only do collectors resubmit coins to the same grading service, they will frequently submit coins from one service to another, in hopes of achieving a better grade.

As well, it is impossible to know whether any of the Proof 1995-W American Eagle silver coins have been lost or even stolen over the past 16 years.

Examining the marketplace to see how many of these sets are selling is probably as good a determiner as any for their current availability, though it still won’t provide a rock-solid number. Checking Internet auction websites such as eBay or contacting dealers who advertise in Coin World may provide some information.