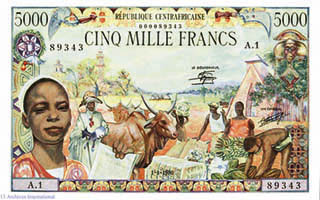 This 5,000-franc note issued in 1980 for the Central African Republic sold at auction for $1,534 on March 11 by Archives International Auctions.

The note is graded Gem Uncirculated 65 Exceptional Paper Quality by Paper Money Guaranty. The price of the note includes the 18 percent buyer’s fee.

The face of the colorful note displays various vignettes of daily life — farm animals, people, and crops such as cotton and plantains. The back design shows a wood carving, the face of a man, airplane, train and tractor.

The note was in Part 1 of the Scarsdale Collection of post-1960 modern African bank notes that was assembled over many years, according to Robert Schwartz of AIA.

Part 1 of the Scarsdale Collection included 241 lots of which 209 lots were sold, for a sell-through rate of 87 percent.

The Central African Republic is known for its production of cassava and peanuts, as well as cotton, the principal exported cash crop.

The nation was once a French colony, part of French Equatorial Africa. In the late 19th century it was known as the colony of Ubangi-Shari, named after two major rivers in the area.

For more information about this or future auctions, write to Archives International Auctions, 1580 Lemoine Ave., Suite No. 7, Fort Lee, NJ 07024.