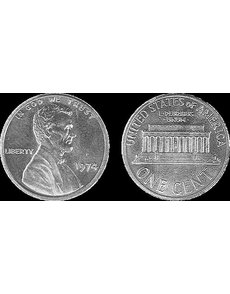 According to the U.S. Mint, experimental 1974 bronze-clad steel cents that mistakenly escaped melting remain illegal for private ownership. Shown is an example examined by Coin World in 1994. Color photos are unavailable.

I read the May 23, 2011, “Readers Ask” column regarding 1974 and 1975 aluminum cents and how they are still illegal. If memory serves, the same situation happened with another cent coin. Is there a way to have the Mint change its position on the experimental cents?

The “other cent” Mr. Hyde refers to may be the 1974-dated bronze-clad steel cent struck at roughly the same time as the aluminum cents. It was unknown to hobbyists until a collector contacted Coin World and sent one for examination in 1994.

The possessor of the coin had been an employee at a Pennsylvania steel mill in 1974 when U.S. Mint officials brought bags of the bronze-clad steel cents to be destroyed in the mill’s furnaces. According to the employee’s account, a bag broke open and Mint officials failed to recover all of the pieces. The employee reported that five to eight cents were kept by workers.

The piece was examined by the Coin World staff and appeared genuine. The composition of the piece — two outer layers of a bronze-colored metal bonded to a gray-colored core that was attracted to a magnet — matched the description of one of the experimental compositions in the official Treasury report on the cent experimentation.

After being contacted by Coin World in 1994, U.S. Mint officials acknowledged that the bronze-clad steel cents had been struck. Before that admission, the Treasury Department’s official report on the testing performed in 1973 and 1974 had denied that the Mint used Lincoln cent dies to strike anything other than aluminum. The report claimed that nonsense dies (dies that employ coin-like designs and legends without duplicating existing coins) were used to strike the nonaluminum compositions.

The entire report can be viewed online at http://en.wikisource.org/wiki/Alternative_Materials_for_One_Cent_Coinage.

Unless the Mint does an about-face on its own, Congress would need to pass specific legislation authorizing private ownership of these experimental pieces. Hobbyists who wish to see the status of the test strikes changed may wish to contact their congressional representatives.