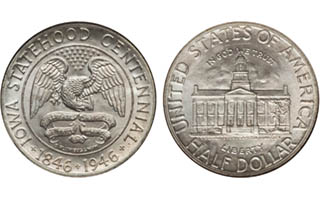 At a 2014 auction this Iowa Statehood Centennial commemorative half dollar graded Mint State 67 by Numismatic Guaranty Corp. brought just under $200.

When selecting a coin that represents a good value for the grade, consider the price differential between grades.

For the 1946 Iowa Statehood Centennial commemorative half dollar the price jump between a lightly circulated example and one in a solid mid-range Mint State grade of MS-64 is only around $20. At recent auctions, lightly circulated About Uncirculated 58 representatives have brought $85 while MS-64s and even the occasional MS-65 can be found for a little more than $100.

For $200, one can find the occasional MS-67 example certified by either Numismatic Guaranty Corp. or Professional Coin Grading Service. For example in a March 9, 2014 auction a generally brilliant example graded NGC MS-67 brought $199.75. Exceptional MS-67 examples with great eye appeal can bring as much as $500.

The Iowa commemorative half dollar is an issue which “comes nice”. This means that examples are generally well-struck, have good surface preservation and full luster, and many were saved around the time of issue in nearly pristine condition. As such, the population of MS-67 examples is high, meaning ample supply for commemorative coin collectors which keeps prices at reasonable levels.