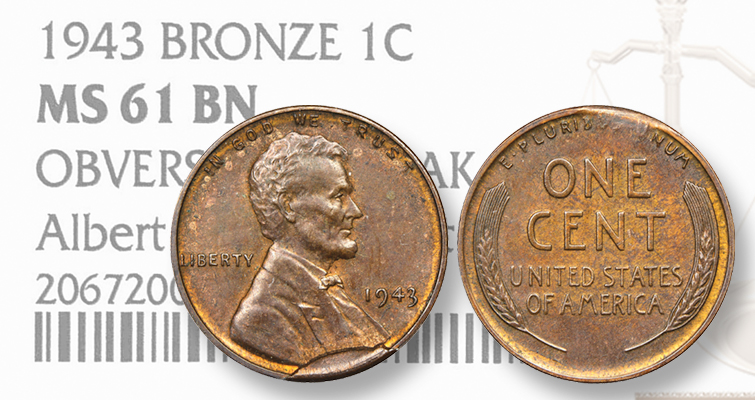 In 1943, the U.S. Mint changed the composition of the Lincoln cent from 95 percent copper to copper-coated steel. A few of the pre-1943 planchets were struck, however, creating the rare 1943 Lincoln bronze cents. 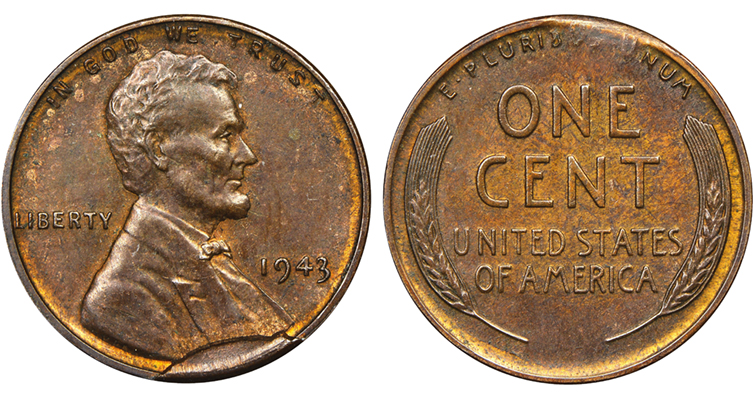 A rare 1943 Lincoln cent struck on a bronze planchet and recently discovered in the estate of a former Philadelphia Mint employee will highlight Heritage’s Jan. 4 Platinum Night auction in Tampa. 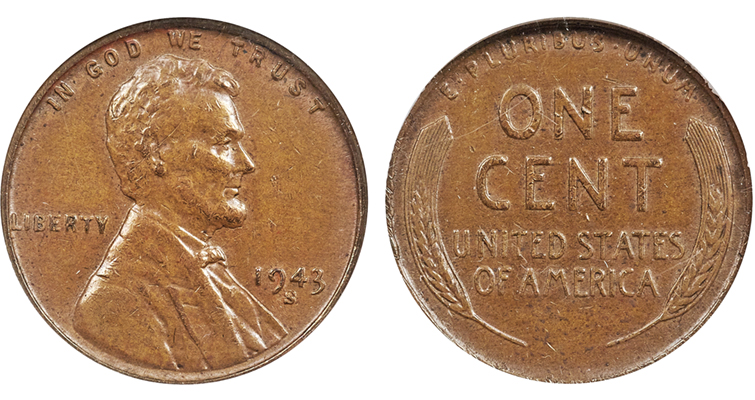 A 1943-S Lincoln bronze cent discovered by a 14-year-old collector in 1944 graded AU-53 is one of just six known bronze cents struck in 1943 at the San Francisco Mint. 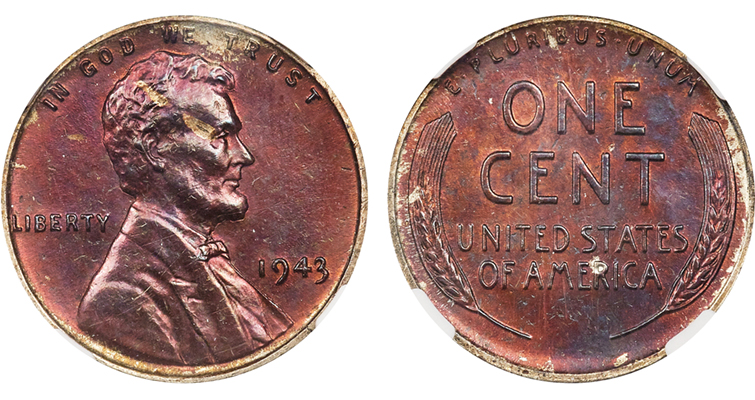 Another rare off-metal error with a Pratt provenance is an MS-61 1943 Lincoln cent likely struck on a predominantly silver planchet for a Netherlands 25-cent coin.

A recently discovered 1943 Lincoln cent struck on a bronze planchet and graded Mint State 61 brown by Numismatic Guaranty Corp., distinguished by a major obverse die break, is a star of Heritage’s Florida United Numismatists auctions. The 2018 FUN show happens Jan. 4 to 7 at the Tampa Convention Center and Heritage’s various FUN auction sessions will take place at the show and online Jan. 3 to 8.

The rare off-metal error coin emerged in January 2017 at the West Hernando Coin Club coin show in Florida and was one of four wrong-planchet Lincoln cent errors inherited in 1992 by Florida collector Michael Pratt after the death of his father, Albert Michael Pratt. The elder Pratt started working at the Philadelphia Mint as a machine operator on Dec. 26, 1941, and was promoted to die setter on June 4, 1944. He retired from the U.S. Mint effective June 30, 1971.

Pratt told Coin World that he didn’t know how the wartime cents came to be in his father’s possession, since he doesn’t recall his father discussing the coins while he was alive.

As Paul Gilkes explained in the May 22, 2017, issue of Coin World, the coins were almost tossed away. “Pratt said during the executing of their father’s estate, Michael’s eldest of two sisters, who was executor of the estate, told her siblings to take whatever remained in cardboard boxes stored in their father’s garage, because otherwise the boxes and their contents would be sent to the landfill.” Thankfully, inside of one of these cardboard boxes, the coins were discovered by the family, each coin wrapped in paper within a small wooden box with a sliding lid.

Copper-alloy 1943 Lincoln cents are legendary rarities in American numismatics. A regular issue zinc-coated steel 1943 Lincoln cent is common and inexpensive. The Mint did not officially issue any bronze cents in 1943, yet a few 1943 bronze Lincoln cents escaped by mistake.

Heritage writes, “Wartime demand for copper caused the U.S. Mint to change the composition of the Lincoln cent planchet in 1943, from the usual bronze alloy to zinc-plated steel,” explaining, “It seems a small number of bronze planchets became lodged in the trap door of a tote bin used to feed blanks into the coin presses at the end of 1942. Then the tote bin was refilled with steel planchets to strike cents early in 1943. A few bronze blanks became dislodged in the process, and were fed into the coin press, along with the regular steel planchets, resulting in the famous 1943 ‘copper’ cents.” The wrong-planchet issue soon entered the public consciousness, fed by rumors that Henry Ford would present a new car to anyone who located a bronze 1943 Lincoln cent. Counterfeits and altered-date 1943 “copper pennies” are common.

The MS-61 Pratt specimen is visually distinct because of the presence of a large die break — called a retained cud — on the obverse. Since the zinc-coated steel planchets used in 1943 were significantly harder than the traditional bronze blanks, the Philadelphia Mint adjusted its coin presses accordingly. The harder zinc-coated steel planchets were tough on dies, so die breaks are not unexpected on 1943 Lincoln cents.

On the subject coin Heritage observes, “This coin exhibits a remarkable retained cud on the obverse rim at 6 o’clock. As might be expected, the corresponding area on the reverse experienced abnormal metal flow, and design detail is weak from 12 to 1 o’clock. The steel-brown surfaces show a few hints of olive and original red patina, with the minimum number of minor contact marks for the grade.” The description concludes, “Traces of original mint luster shine through the toning and overall eye appeal is most pleasing.” Its weight of 3.09 grams is consistent with the 3.11 grams that a 1909 to 1942 bronze cent planchet would weigh.

With approximately 20 known, copper-alloy 1943 Lincoln cents from the Philadelphia Mint are the most plentiful, followed by six 1943-S copper cents and a single 1943-D copper Lincoln cent.

Also offered at FUN is a one of those six 1943-S Lincoln bronze cents, this one graded About Uncirculated 53 by NGC. It was discovered in circulation by 14-year-old collector Kenneth S. Wing Jr. of Long Beach, California, in 1944.

Heritage writes, “It was exactly the kind of find that would establish the legend of the 1943 bronze cents and keep hopeful collectors searching through rolls of cents down to the present day, but Wing did not publish his discovery at the time. He did show the coin to a local coin dealer, who made a strong offer of $500 for it, but Wing decided to keep his treasure and try to find out more about it.”

The collector kept his treasured 1943-S Lincoln bronze cent until his death in 1996, and it remained in his family until July 2008, when it was sold to Rare Coin Wholesalers for $72,500.

A story on the coin’s sale in the August 11, 2008, issue of Coin World cited a letter to Wing dated Aug. 20, 1946, where Acting Director of the Mint Leland Howard wrote: “In reference to your letter of August 11th, there were no copper cents struck during the calendar year 1943 at any of the coinage Mints. Only the zinc coated steel cent was struck during that year.” An extensive research file maintained by Wing during his life accompanies this lot, which includes letters between the collector and several key numismatic figures of the 1940s and 1950s, including dealer Abe Kosoff.

A June 18, 1957, letter from Vladimir Clain-Stefanelli, then the curator of the Division of Numismatics overseeing the National Numismatic Collection, is also part of the lot. In the letter, Clain-Stefanelli declared Wing’s 1943-S Lincoln bronze cent as genuine. “The authenticity of this piece is in my opinion beyond doubt,” Clain-Stefanelli wrote in his response to Wing. “In fact, as you certainly recall, Mr. Mendel L. Peterson, Acting Head Curator of the Department of History, fully concurred in this opinion.”

Heritage will also present another error carrying the Pratt provenance: A 1943 Lincoln cent weighing 3.52 grams struck on a planchet intended for a Netherlands 25-cent coin, graded NGC MS-61. This error was possible because the Philadelphia Mint struck coins for other countries during World War II, including Curacao, an island in the Caribbean Sea north of Surinam, and part of the Netherlands Antilles. As Heritage noted when offering another example of this off-metal error in 2001, “Curacao was particularly important to the war effort, as its refineries delivered more than 60% of the oil used by the Allies. In addition to providing troops to protect Curacao’s shores, the United States also produced coinage for the Dutch colony. In 1943, the Philadelphia Mint delivered 2.5 million 25 cent coins for shipment to Curacao. These coins also circulated in Surinam.”

Yet, the Pratt coin looks distinct from the other 1943 cents struck on these Netherlands planchets, which are 64 percent silver and 36 percent copper and often a silvery brass color. Heritage explains, “And that is where the peculiarity comes in with this piece. The edge and the extreme peripheries on each side show this expected silvery appearance. However, the interiors are toned bronze or copper. Not toned silver, but toned copper. The only theory we have been able to come up with that makes any sense is that the planchet was not made properly and the metal was not homogenous throughout.”

Of course, there was plenty of experimentation at the Mint during World War II, so this piece might have been a type of pattern, but the details of its production are likely lost to history. The coin has a long X cut into the right obverse field, perhaps as a test mark, and presents an opportunity for further research. 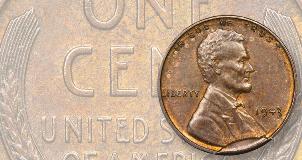