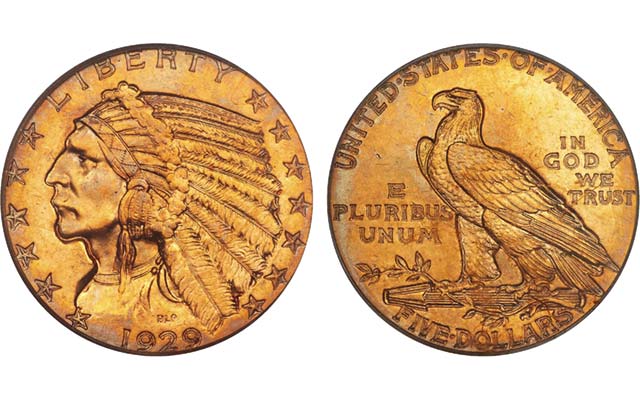 Examples of the 1929 Indian Head gold $5 half eagle were likely among coins turned in to the government by executive order and melted into the bars now stored at Fort Knox.

I am curious about the Gold Recall Act of 1933. I find this law appalling and very unfair, especially as the country was at the depths of the Great Depression. I can’t imagine the U.S. Congress passing such a law unless it was to take advantage of higher gold prices in Europe. (Gold was artificially set at $35 an ounce here in the U.S.) Were people paid at the artificial price of $35 an ounce or the prevailing price worldwide? Where did the recalled gold go? Was it sold, melted or stored at Fort Knox? I expect many people did not comply for various reasons.

By “the Gold Recall Act of 1933,” the reader appears to refer to the April 5, 1933, executive order by President Franklin D. Roosevelt, not a congressional act.

On April 5, 1933, about a month after becoming the nation’s Chief Executive, Roosevelt issued Executive Order 6102, purportedly to provide a jump start to the economy. The order required gold coins, gold bullion and gold certificates (which were redeemable in gold) to be turned over to the government by May 1, 1933, at the official price of $20.67 per ounce (not $35; that official price was instituted in 1934).

The order was not absolute. Citizens could retain $100 in gold coins of any kind, and coins with special collector value were exempted from the recall.

Under the provisions of 6102, citizens who failed to comply risked fines up to $10,000, imprisonment of up to 10 years, or both. Some prosecutions were made under the subsequent executive orders and the Gold Reserve Act of Jan. 30, 1934.

The gold coins, bullion and gold dust turned in by American citizens were melted down into bars weighing 400 troy ounces each. The melted gold forms the bulk of the nation’s gold reserves stored at the Fort Knox Gold Bullion Depository.