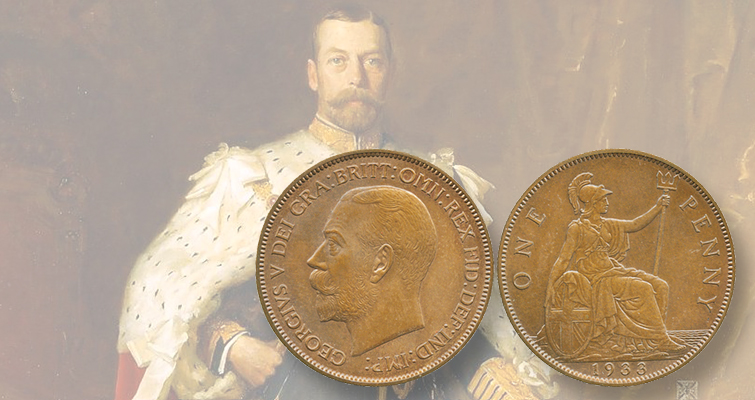 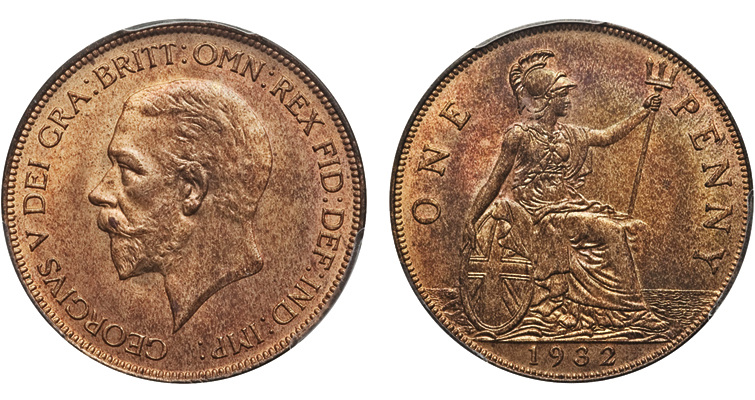 A 1932 King George V penny is noticeably different from the 1933 pattern, with a neckline that differs considerably from the pattern.

A rare example of a British pattern coin from 1933 that was never adopted for circulation was sold in a London auction for a record price.

The pattern was created by the moneyer Andre Lavrillier for the proposed 1933 penny, a renowned rarity in its own right.

The firm said the price is a record for a bronze or copper penny.

After some intense bidding to start with, bidding was eventually whittled down to just two telephone bidders, who went toe-to-toe for a good five minutes before the hammer finally came down at more than double the coin’s estimate, according to the firm. The winning bidder has not been identified.

The history of the circulating version of the 1933 penny is well documented, but what is probably less-known (especially outside of numismatic circles) is the rarity of the pattern version.

Six or seven examples of the circulating design are known altogether, and each time an example is offered at auction the rarity is a highlight of that sale.

However, only four examples of Lavrillier’s pattern were made and one of those is held in the Royal Mint Museum. The other three are in private hands, which makes this one of the rarest coins in British numismatics.

The Standing Committee on Coins Medals and Decorations rejected Lavrillier’s pattern in December 1932.

In 1933, deep in a global depression, banks in England had enormous stocks of pennies — so much that there was no need to make any more.

Three of the six or seven circulating examples (carrying the head of George V on the obverse and a seated Britannia ruling the sea on the reverse) are in private hands, according to the Royal Mint Museum.

The circumstances surrounding the 1933 pattern differ from those of the circulating examples.

“Ghosting” was ever more prevalent on Britain’s bronze coinage from 1911 forward. Any coin bearing on one face a bust or head in fairly-high relief and a lot of open area on the other face is subject to having the portrait show right through to the other side, a phenomenon known as ghosting.

The pattern was created as an experiment with the relief of the coin to combat ghosting, according to Michael J. Freeman, in The Bronze Coinage of Great Britain.

A smaller head of King George V that came in use in 1928 alleviated much of the ghosting, but Royal Mint officials weren’t satisfied, so they sought Lavrillier’s assistance.

The French artist had already produced a satisfactory effigy of Romania’s King Carol II for the Royal Mint when it secured a contract in 1929 for the new royal’s coinage.

According to the 1930 Royal Mint Report, Deputy Master Sir Robert Johnson was impressed with Lavrillier’s artistic skill and his understanding of the technicalities in die making — an understanding that was often lacking in his English counterparts, the auction firm said.

His design was presented in January 1933, when the committee was presented with an electrotype of Lavrillier’s model, together with “specimens struck in a metal press … bearing Lavrillier’s revised bust of his majesty and new reverse,” according to the auction house.

Members found, however, that the ghosting had not completely been eliminated, and his effigy design (particularly the neck) was criticized.

Although the rejection was not formally recorded, it is surmised from the minutes of this meeting that Lavrillier’s experiment was effectively ended right there, the auction house said.

The examples presented to the committee found their way into the Mint Museum in November 1935. Records show their arrival, and later pencil-marks in the records show them being de-accessioned from the museum’s holdings.

As noted previously, one piece remains in the Royal Mint Museum.

Baldwin's previously sold the example now coming to auction in its May 2, 2006, auction for £18,975, including the buyer’s fee. 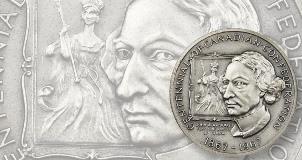