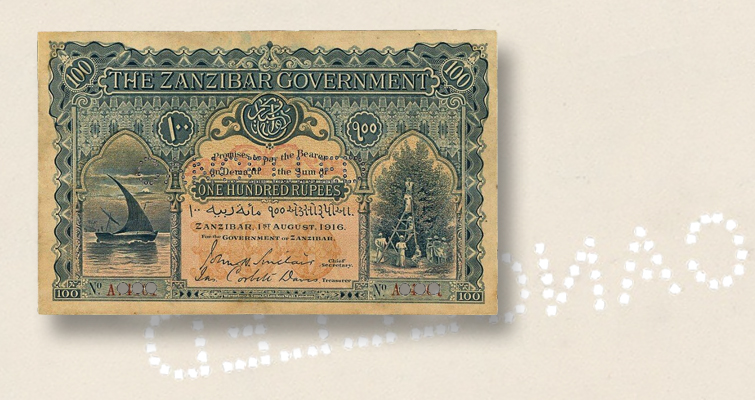 The note has never before appeared at auction, and ranks as the rarest in a series of notes where all issues are elusive at best. Barnaby Faull, Spink’s director of bank notes, described it as “definitely one of the World’s great banknote rarities.”

The blue and pale tan-orange issue with a red serial number has the standard face design of a dhow at left and farmers harvesting cloves on the right. It is perforated with the world CANCELLED.

The back is blank. Spink said that it is likely that about 100 years ago it was backed on paper, which became brittle with age. That paper was removed, and the remaining note was graded Very Fine 30 Net by Paper Money Guaranty.

Spink says it was found in the Zanzibar region.

A separate auction conducted on the same day offered the 35 notes in the Drs. Joanne and Edward Dauer Collection of English Banknotes. The top seller, at £38,400 ($53,662), was a Bank of England £1,000 note, London, dated Oct. 15, 1935, signed by Kenneth Oswald Peppiatt, and graded About Uncirculated 50 Exceptional Paper Quality by PMG. Only four of these £1,000 notes are graded by PMG, only two of which are signed by Peppiatt. This is the only example designated Exceptional Paper Quality. 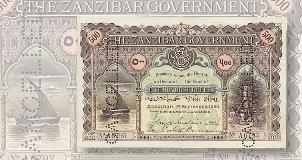 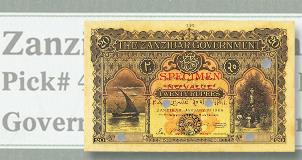 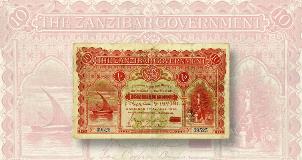