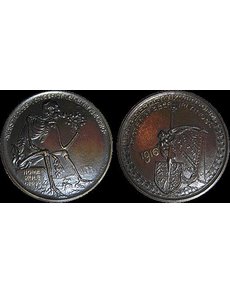 A reader’s medal, if genuine, was produced by German medalist Walter Eberbach during World War I. A satiric piece, it mocks the British Gen. Maxwell’s heavy-handed response to the Irish Easter Rebellion of 1916.

My father gave me this 1916 Irish medal. It measures about 2¾ inches in diameter and I think it’s copper or bronze.

Can you tell me anything about this medal? Who made it? My father told me it was rare.

The medal in question appears to be the work of German medalist Walter (or Walther) Eberbach, though its authenticity would have to be affirmed in person by a reliable medals expert.

Similar to the works of the more notable and prolific German medalist Karl Goetz, Eberbach’s series of at least 12 satiric medals were also produced during World War I, mocking various Allied leaders and nations.

Vol. 7 of Leonard Forrer’s Biographical Dictionary of Medallists makes some mention of the engraver and series, but M. Frankenhuis, in his book Catalogue of Medals, Medalets and Plaques Relative to the World War, 1914-1919, provides a more complete tally of the series dubbed “Totentanz” or “Dance of the Dead.”

On this particular medal, the target of scorn is British Gen. Sir John Maxwell and his brutal role in crushing Ireland’s Easter Rebellion in 1916.

The obverse of the medal portrays a skeleton wearing a pillbox hat, smoking a pipe and holding a bouquet of flowers. It sits upon a gravestone which reads HOME RULE R.I.P. Eberbach’s name is at the lower right along the medal’s rim.

The legend on the obverse reads MAISTRAUSS VON DER GRUENEN INSEL 1916, which loosely translates in English to “May (flower) bouquet of the Green Island 1916.”

The reverse features an Irish harp interposed with a shovel depicting the British royal arms on its blade. Above the harp appears the German legend DEM GENERAL MAXWELL DEM TOTENGRÄBER IRLANDS (“Gen. Maxwell, the gravedigger of Ireland”).

The degree of rarity of Mr. Maloney’s piece is a question not easily answered. “Readers Ask” was unable to pin down any definitive numbers, neither of how many were produced in any given composition nor any estimate of how many may still survive today.

However, David T. Alexander, senior numismatist at Heritage Auctions, states that the bronze version is rarer than the more available cast iron medal “though none of Eberbach’s medals can be called common.”

“Iron came in with the metal shortages early in World War I,” Alexander says. “We also see this with the medals of Karl Goetz.”

If proven to be authentic, Alexander estimates the value of Maloney’s medal as “anywhere from $300 to $650.”