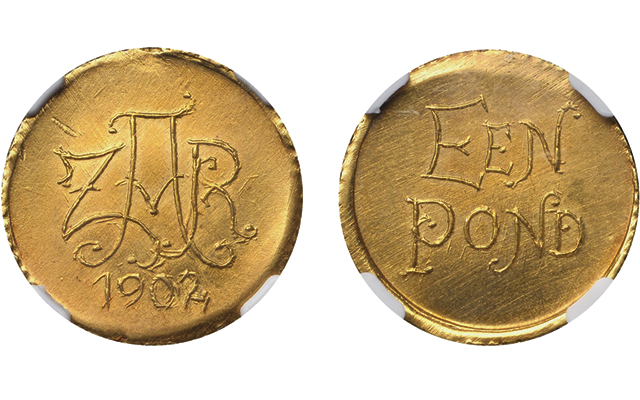 An emergency issue gold coin struck during the Anglo-Boer War leads all lots in Dix Noonan Webb’s Sept. 22 auction of the Robert Bakewell Collection of Coins of South Africa.

The 1902 Veld pond, issued during the term of Schalk Willem Burger, is among the great rarities of South African coinage.

It certainly has a compelling history, since the coin was fashioned from locally mined gold in the Transvaal late in the struggle for independence. As siege pieces, the Veld ponds are “some of the most romantic coins in the world,” wrote Ken Jacobs, in Coins of South Africa.

Making the dies was a laborious process, and six dies were damaged during the tempering process (plunging the hot dies into oil or water) before the seventh die was produced without incident.

A collar die was also created by hand, edge grooves painstakingly created so when the dies all met with force, the coins would fill the space and be milled, just like the British sovereign it was meant to supplant.

The obverse shows the initials ZAR and the 1902 date, and the reverse carries the mark of value, EEN POND (one pond).

Few legitimate examples survive in the quality of the example in the Bakewell Collection, according to the auction firm.