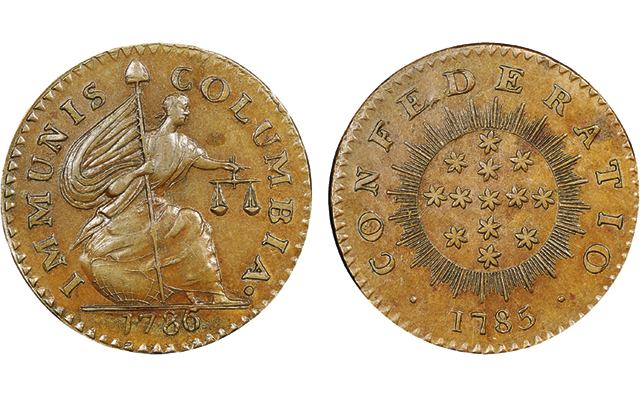 Part V of the Eric P. Newman Collection is highlighted by a muled copper piece struck from a 1786 Immunis Columbia obverse die and a 1785 Confederatio Large Stars reverse die. The coin, to be offered Nov. 14 and 15 in New York City by Heritage Auctions, is one of two or three examples known.

In coinage, a mule is a piece struck from dies not intended to be paired together.

The Immunis Columbia pieces were among the earliest attempts at a national coinage.

The piece was struck with the 1786 Immunis Columbia obverse die, which features, facing right on the obverse, a Seated Liberty or Columbia figure, with pole and cap and scales of justice. The 1786 pieces were typically mated with a reverse die showing either an eagle or a shield.

However, the reverse of the offered coin was struck with the 1785 Confederatio, Large Stars Reverse die. Normally, a 1785 Confederatio piece is mated with an obverse showing a standing female figure.

The mule in the auction is attributed as the Whitman 5665 variety in the Whitman Encyclopedia of Colonial and Early American Coins by Q. David Bowers, and the piece is graded Mint State 64 Brown by Numismatic Guaranty Corp.

“We are honored to bring this latest selection of coins to auction to the enjoyment of collectors everywhere and to the benefit of the Eric P. Newman Numismatic Education Society,” said Jim Halperin, co-chairman of Heritage Auctions. “Part V will feature superb Colonial copper and important 19th century rarities in the finest condition ever recorded and we think collectors will be dazzled to see what true treasures this latest offering holds.”

The auction will offer approximately 970 lots, according to Heritage.

Items being sold are from the extensive collection of Eric P. Newman Numismatic Education Society (a Missouri not-for-profit corporation) and have been assembled over a period of 90 years.

The previous four Newman auctions have realized more than $45 million.

Many of the coins are pedigreed to the collection of Col. E.H.R. Green, from whose estate Newman acquired the pieces in the 1940s. These pieces have since been off the numismatic market.

The 1786 Immunis Columbia, 1785 Confederatio, Large Stars Reverse copper mule to be offered in the Newman V auction is believed to be the finest example of a very small number known.

A corroded Very Good 7 example was offered Aug. 1, 2002, by Superior Galleries in its auction held in conjunction with the American Numismatic Association summer convention. The coin did not sell in that auction.

More recently, according to the Heritage auction lot description for the Newman coin, another lower grade piece is illustrated in the Whitman Encyclopedia of Colonial and Early American Coins. The Heritage cataloger could not, however, verify whether the piece in the Whitman reference is a third example.

The 14 different varieties known are cataloged in the Whitman Encyclopedia.

These pieces are also linked to punches used in the production of dies for the Nova Constellatio coppers dated 1783 and 1785.

The Heritage lot description suggests that proponents of the alternative conclusion, that these pieces were produced in America, “point to a very distinctive punch for the letter S that is identical on the Nova Constellatio coppers, the Immunis Columbia pieces, at least one New Jersey reverse die, and certain issues of Machin’s Mills in New York.”

“While Newman identifies a contemporary newspaper account from London dated 1786 as evidence for the English origin of these pieces, [numismatist Michael] Hodder dismisses the account, saying you can’t believe everything you read,” the Heritage catalog notes.

For more information about the sale, visit Heritage Auctions online or call the firm at 877-437-4824.