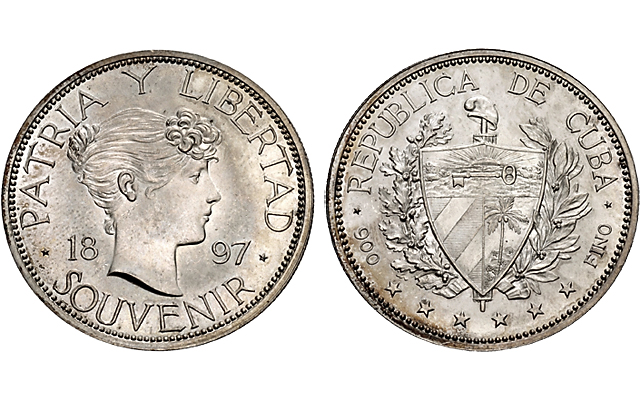 Printed catalogs are available for purchase A digital edition may be viewed at the CNG website.

Coin World is highlighting three issues that combine condition, rarity and history. Below is the first.

In 1897, to raise money for Cuba’s struggle for independence, a New York banker came up with the idea to issue souvenir “coins.”

About the same size, weight and fineness as the World’s Columbian Exposition half dollar, the 1897 Cuban liberation pesos bear no denomination (they read SOUVENIR) and were sold for $1 each.

They were designed by Phillip Martiny and show a personification of Liberty on the obverse and the Cuban coat of arms on the reverse.

Gorham Manufacturing Co., of Providence, R.I., was contracted to produce the pieces, but could not initially, so in July 1897, Dunn Air-Brake in Philadelphia struck the first 828 pieces, using dies and planchets that Gorham had provided. In August, Gorham produced an additional 9,142 pieces. The two versions can be distinguished by the spacing of the date on the obverse, the rarer ones having a wide date.

In 1898, an additional 1,000 examples, labeled as “UN PESO,” were ordered. After the United States liberated Cuba in 1898, all examples of the silver peso were accepted as legal tender.

Lissner has three examples of this issue, all graded Mint State 65.

The piece struck by Dunn exhibits mottled dark toning, original patina and full frost, according to the auction houses, and is estimated at $3,000.

The two subsequent lots, the more common pieces, are both estimated at $600.