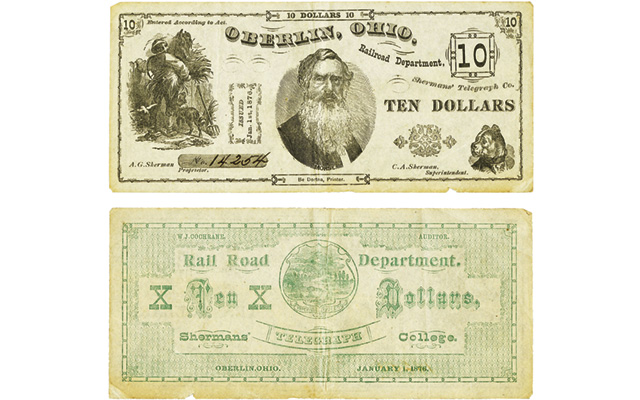 This $10 training note used in a telegrapher's college sold for $152.75 Nov. 18 in an Internet auction by Heritage Auctions. The note was used at Sherman's Telegraph College and is dated Jan. 1, 1876.

A training note used in a telegrapher’s college in Ohio sold on Nov. 18 for $152.75 in an Internet auction by Heritage Auctions.

The $10 training note was used at Shermans’ Telegraph College and dated Jan. 1, 1876. A vignette portrait of Samuel F.B. Morse, the man credited with developing a single-wire telegraph system for use in the United States, is depicted on the face with, to the left, a smaller vignette of a farmer feeding a horse and, at right, a portrait of a dog. The back design indicates the college’s Rail Road Department issued the note.

The college trained telegraph operators between 1868 and 1876.

The note was part of the Wendell Wolka Collection.

The piece was graded by the auction firm as Fine–Very Fine with two tiny missing corner tips and a margin divot.