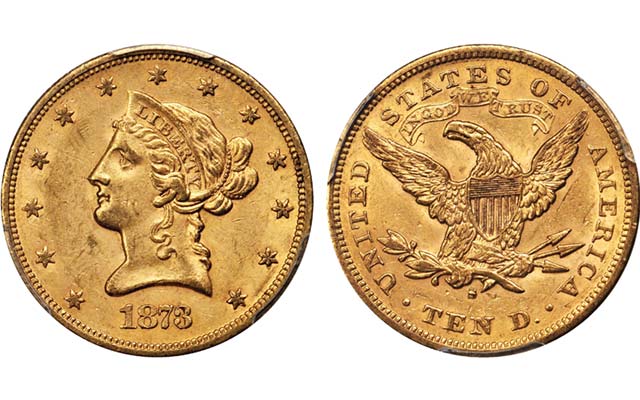 This 1873-S Coronet gold $10 eagle is being offered in the May 20 Rarities Sale being conducted jointly by Stack's Bowers galleries and Sotheby's. The coin is graded MS-62 by PCGS.

Europe has long been a source for U.S. gold coins, thanks to investors who exported the coins from the United States in huge quantities before and after restrictions were placed on domestic gold ownership in 1933.

While many of these gold coins are common, scarcer and rarer pieces occasionally surface. In March, an 1873-S Coronet gold $10 eagle was discovered in Europe, according to Stack's Bowers Galleries. The coin (also known as a Liberty Head eagle)  will be offered at auction in May as a part of the New York Rarities Sale by Stack's Bowers and Sotheby's.

While it has not been disclosed where or by whom the classic U.S. coin was found, we do know that it is already considered one of the finest known examples of the 1873-S eagle. Professional Coin Grading Service has graded the coin Mint State 62, making it the highest certified example, states Stack's Bowers. The firm notes that it ranks higher than the MS-61 piece formerly in the Harry W. Bass Collection.

Mintage records indicate that 12,000 examples of this coin were struck, and researchers Jeff Garrett and Ron Guth state that it is an "underrated date," in their gold coin encyclopedia. The late numismatic author David Akers noted that this date is rare in any grade and is virtually unknown in Uncirculated or Mint State.

The newly discovered 1873-S Coronet eagle will be offered as lot 70 at the New York Rarities Sale.

The May 20 auction will primarily feature high-grade gold coins, according to the two auction houses.