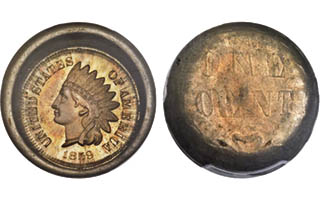 The coin is a form of error called a "die cap," one of the more desirable error types and almost always very visually appealing. The existence of such an error on a classic U.S. coin like the first-year-of-issue Indian Head cent only adds to its appeal.

A die cap falls into the striking category of error coins since it orginated during the striking process (planchet and die errors are the two other major categories). A die cap occurs because of a failure of a newly struck coin to be ejected from the coining press after it is struck.

Normally, once a coin is struck, a mechanism shoves the coin off the lower (or anvil) die and a new planchet is fed into the coining chamber to be struck. This coin, however, stuck to the obverse (or hammer) die and presented its reverse face to incoming planchets.

The new planchets would have been struck by the combination of an unobscured reverse die (thus receiving a normal reverse image) and the reverse face of the 1859 cent. As this die cap slammed into the upper face of the new planchet, it imparted an incused, mirror image of the reverse design (the die cap served as a temporary surrogate die); the first few of the new coins struck in this manner were another form of highly desirable error called a brockage.

Because the copper-nickel composition of the cent serving as a die cap is much softer than the steel used for the dies, and the pressure used to strike the coins is so high, the die cap quickly began to distort. Two things began to happen, very quickly:

? The metal of the die cap began to flow upward around the shaft of the hammer die; for a time, the shape of the cent resembled a bottle cap, with the design of the obverse resting at the bottom of the cap.

? The design on the reverse face began to spread and weaken under the repeated strikes. For die caps that do not survive intact, the designs are eventually completely obliterated.

The 1859 Indian Head cent sold in the Heritage auction is an early-stage die cap. The reverse design is still identifiable, A large, distorted ONE CENT is visible, as is the ribbon bow of the laurel wreath at the bottom. The obverse design shows some outward metal flow that is especially visible rising from the tops of the letters of UNITED STATES OF AMERICA and the bottoms of the numerals in the date. The central Liberty device is very strong (what the Heritage catalog calls "hyper-detailed"), the result of the die cap having been struck several times, like a Proof coin.

It is rare for a die cap to survive intact. More often than not, the metal of the cap is quickly hammered flat, with all of the design elements obliterated (incoming coins struck at this stage are not brockages but are capped die strikes). Eventually, the die simply ceases to exist as it is hammered out of existence.

The die cap in the Heritage auction is graded Mint State 66 by Professional Coin Grading Service and the PCGS slab is affixed with an Eagle Eye Photo Seal sticker from Indian Head cent specialist Rick Snow. Amazingly, the MS-66 grade assigned to the coin is among the highest assigned for an 1859 cent, "die cap or not," in the words of the cataloger. PCGS has graded just 21 1859 Indian Head cents with that grade, with just one higher piece (MS-66+).