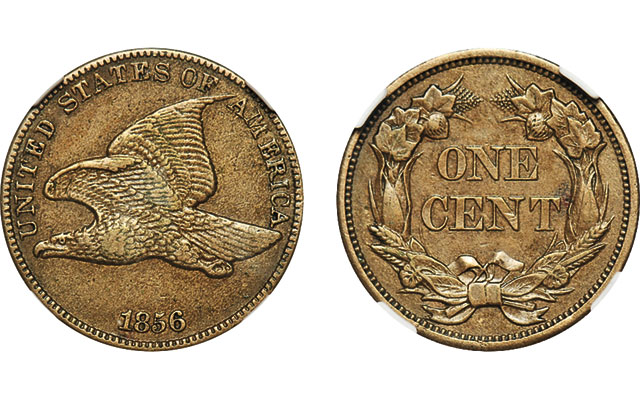 Here is one of those coins that graded at the About Uncirculated level even though it is a Proof piece:

The 1856 Flying Eagle cent is a classic 19th century key date. The issue is generally considered by numismatists to be a pattern coin, which is why Numismatic Guaranty Corp. characterizes this example as a Proof piece rather than a Mint State piece, even though it doesn’t look like a Proof coin by traditional standards.

Scotsman notes that this issue is extremely popular with album collectors and adds, “One can only imagine the thrill of displacing this marvelous coin from its slab and placing it into an old, vintage album, filling what is very easily the toughest small-cent hole for any set.” The piece, graded Proof 53, exhibits some light wear not uncommon for this issue, which enjoyed very wide distribution especially considering its limited mintage. The mintage is unknown but is thought to be between 1,500 and 2,000.