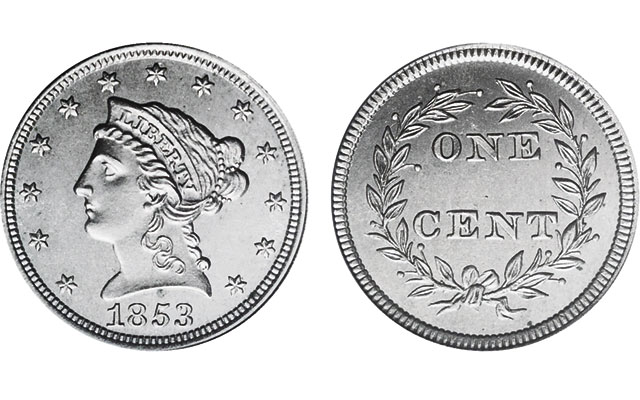 This copper-nickel pattern small cent was struck using a regular-issue quarter eagle die and a specially designed die showing the denomination with a wreath.

While preparing to move a bookcase in January, I found a copy of the 1853 U.S. Treasury secretary’s report to the Senate wedged behind the books. I don’t remember buying it, but it makes for interesting reading and provides a glimpse into the operation of the U.S. Mint in the run-up to coinage of small cents.

The 21-page report is disbound from a larger book, likely that year’s presidential papers, and has the wonderful three-dimensional feel of handset type.

Unlike the annual Mint director’s report, which concerns itself with production, the Treasury report speaks to the cost of doing business. The report details wages and miscellaneous expenditures.

The year was a difficult one for the Mint.

Rising metal prices were placing a cross-hair on copper and silver coins. Gold coins were produced in abundance as gold poured into the channels of commerce from the California Gold Rush.

Since 1850, the Mint had been experimenting with smaller cents. The issue became even more critical in 1853 when copper crossed the 40-cent-a-pound mark, the point, when labor is factored in, that it cost the government more than a cent to make a cent.

In 1853, the Mint produced an extensive series of pattern cents in copper, copper-nickel and billon (copper-silver). The Mint repurposed a quarter-eagle obverse die to produce many of the coins. The reverse showed the words ONE CENT within a wreath. Others were uniface, using just the denomination reverse.

Four years later the copper-nickel alloy won. “White” cents produced from 1857 through mid-1864 were made of copper-nickel.

In mid-1853, the Mint reacted to rising silver prices by reducing the weight of half dimes, dimes, quarter dollars and half dollars. The new lightweight coins had arrows beside the date. Older silver coins were quickly set aside by the public for their higher silver content. The Mint ramped up production of lightweight coins to meet the demands of commerce.

The Mint had an annual payroll of about $120,000 in 1853. Mint Director J.R. Snowden was the highest paid, taking home $3,500 a year. Chief Coiner Franklin Peale, who designed the Mint’s coinage presses, and engraver James B. Longacre, famous for the Indian Head cent, were paid $2,000 a year, slightly more than the $1,800 judges were paid in Pennsylvania and 5.3 times more than the $376-a-year skilled laborers earned in manufacturing.