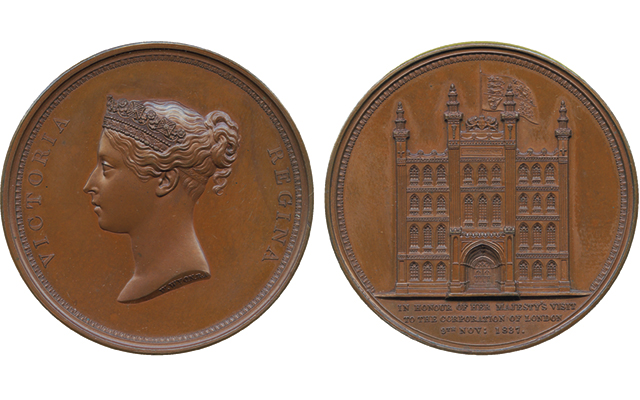 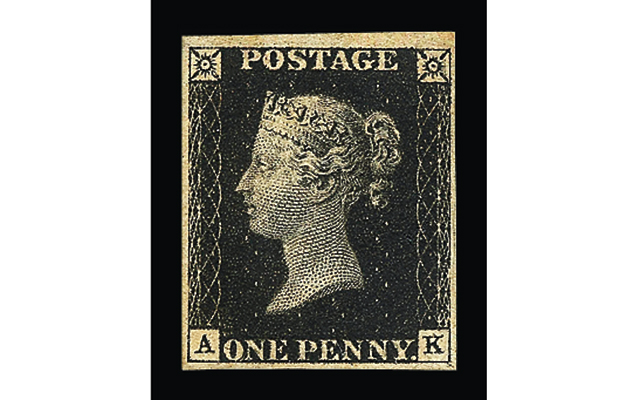 Great Britain’s “Penny Black” stamp is famous for being the world’s first adhesive postage stamp used in a postal administration. Featuring a bust of Queen Victoria, the stamp marked the introduction of pre-payment of postage.

But collectors may not realize the design was borrowed from a medal by William Wyon, an example of which sold June 7 by A.H. Baldwin & Sons Ltd.

The bronze medal, in Good Extremely Fine according to the auction house, realized £360 (about $605 in U.S. funds), including the 20 percent buyer’s fee. In British grading, Good Extremely Fine represents the About Uncirculated range of grades in the American grading system.

The medal shows a diademed Queen Victoria on the obverse and commemorates her 1837 visit to the Corporation of London’s Guildhall, seen on the medal’s reverse.

The 55-millimeter-diameter medal attracted the attention of postal officials working on the stamp design, and the Penny Black resulted. Only used for about a year because the red cancellation ink was hard to distinguish and easy to remove, the Penny Black lives on in philatelic lore.

For those collectors who can’t afford the Mint-condition stamp, the medal is a more affordable alternative.