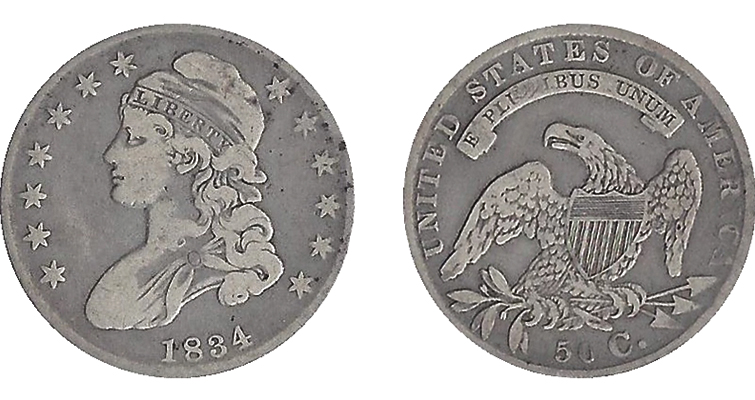 Brad Karoleff sent gratis to Young Numismatist Garrett Ziss this 1834 Capped Bust half dollar after Ziss was able to tell him what was inscribed on the edge of the coin. Images courtesy of Garrett Ziss.

1834 is a year unlikely to excite many numismatists, but if you look at it from another perspective you may change your opinion a little.

The die marriage collectors of the coinages engraved by John Reich will note that this year is not represented by any extremely rare die marriages. You can begin your collecting career focusing on this year and not have to worry about those pesky rare marriages.

The 1834 Capped Bust half dimes are represented by five marriages with the two scarcest being Rarity 3 (301 to 400 known). Three obverses are paired with three reverses to produce the five marriages.

The Capped Bust dimes are represented by seven marriages, with only one, John Reich 3 (Early United States Dimes 1796-1837 by David J. Davis, Russell J. Logan, Allen F. Lovejoy, John W. McCloskey and William L. Subjack) being Rarity 5 (46 to 60). This is not a tough R-5 and can be found with a little perseverance at type coin prices.

The different numeral 4 styles for the dimes will make an interesting grouping.

The Capped Bust quarter dollars will need five die marriages for completion. The toughest will be the Browning 5 (Early Quarter Dollar of the United States Mint 1796-1838 by Rory R. Rea, Dr. Glenn Peterson, Bradley S. Karoleff and John J. Kovach Jr.), which is an R-5. You may be able to find one at type coin price, but if you have to pay a premium it will not be much in lower grades.

The Capped Bust half dollars will be the greatest challenge, with 21 coins needed for completion.

The scarcest will be the Overton 110 (United States Half Dollar Die Varieties 1794-1836 by Donald L. Parsley and Al. C. Overton), an R-4 (118 to 158 known). A small premium will put this one in your collection if you are unable to find it unattributed. Different size numeral and letter punches will make them more interesting.

1834 is important to me for another reason. In 2012, I was the auctioneer for the Young Numismatists’ auction at the American Numismatic Association’s World’s Fair of Money.

A first-time attendee at the sale was disappointed that he could not purchase a Capped Bust half dollar in the auction. I told him that if he could tell me what was on the edge of the coin I would send him one. He answered correctly, and I supplied him with an 1834 half dollar that he then had to attribute. He has become a friend and one of the brightest Young Numismatists I know.